Jose Mourinho confirmed on Saturday that Paul Pogba would start against Valencia in the Champions League on Wednesday.

The Frenchman’s selection for a relatively meaningless game – Manchester United have already qualified for the last 16 as runners up behind Juventus – means he will not be playing at Anfield on Sunday.

Mourinho, who called on Pogba to improve his attitude after beating Fulham over the weekend, is likely to play at Anfield with a midfield trio of Nemanja Matic, Ander Herrera and Marouane Fellaini.

And so, for this game with Valencia, the 55-year-old may well opt for a midfield which supporters actually like. Here it is. 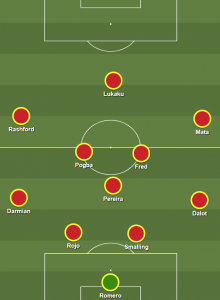 Using those three together is absolute anathema to Mourinho. He does not trust Pogba as a person or player, refuses to use Fred until the defence improves (which will be not until at least 2034), and probably forgets Pereira exists a lot of the time.

The only instance in which this trio could be fielded, I’m afraid, is in dead rubber occasions such as the one on Wednesday. Players who bring more skill than brawn are, to Mourinho, inherently unreliable.

But for this visit to the Mestalla, the craftsmen in midfield will get a chance to show what they can offer this team, before Mourinho reverts straight back to the bulldozers for Anfield on Sunday.