Jose Mourinho will want to make a number of changes for Manchester United’s trip to Valencia in the Champions League.

Man United secured qualification to the knockout phases with a 1-0 win over Swiss side Young Boys at Old Trafford last month, rendering this clash with the Spanish side a total dead rubber.

The boss has already confirmed that Paul Pogba, dropped for the last two games, would feature in Spain, but more changes will be made wherever possible ahead of the trip to Anfield on Sunday.

Here is how we think United will line up for the meeting with Valencia at the Mestalla. 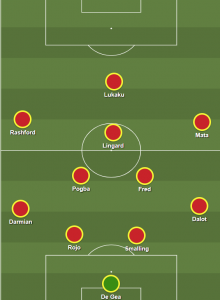 Mourinho looks set to provide Romelu Lukaku with a chance to build on a solid performance against Fulham at the weekend – but may well decide to opt for using Marcus Rashford in the No.9 role at Anfield.

It is in midfield where the most notable changes are expected to occur. Ander Herrera, Nemanja Matic and Marouane Fellaini all look set to play against Liverpool, which lays the platform for Fred and Pogba to finally get some playing time together.

Diogo Dalot may not be ready for Anfield in the mind of Mourinho, but the visit to Spain provides him with another opportunity to cement himself in the squad after impressive performances against Arsenal and Fulham.