Jose Mourinho heads into this weekend’s crucial clash with Liverpool at Anfield beleagured by another injury crisis.

Sanchez and Lindelof are definitely injured. Others are probably also definitely ruled out for this game. Others may recover.

But, well, let us assume the worst, and try to put together a team from the options available which could avoid a battering at Anfield on Sunday afternoon. 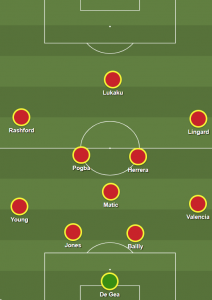 Mourinho has already confirmed that Ashley Young, Jesse Lingard and Marcus Rashford will all start the game, while rested duo David de Gea and Nemanja Matic will naturally return.

Paul Pogba did not perform particularly well against Valencia – nobody did, really – but his range of passing is needed if United are to avoid being bogged down in the middle. He will need to play a faster game.

At the back, Mourinho may well have no choice but to use Eric Bailly and Phil Jones, the duo which played so chaotically during defeat at the Mestalla.

Put simply: United need a miracle on Sunday if they are to avoid defeat.