Ole Gunnar Solskjaer provided Manchester United supporters with the perfect early Christmas present by overseeing a rampant 5-1 win away at Cardiff on Saturday.

A similar performance against Huddersfield Town at Old Trafford on Boxing Day would further transform the mood of supporters following a miserable five months under Jose Mourinho.

The Norwegian boss will likely stick with the same attacking structure whilst resting a few players amid a busy festive schedule.

With that in mind, here is how we think Man United will set-up against David Wagner’s side. 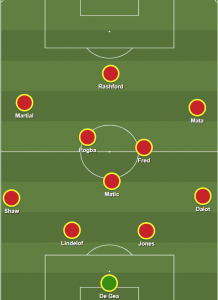 The way full-backs bombed forward at Cardiff served to transform the dimension of United’s attacks throughout the game. Luke Shaw, especially, linked up magnificently with Paul Pogba and Anthony Martial on the left to create a trifecta of incisive football down that flank all afternoon. Diogo Dalot, rested on Saturday, will be licking his lips.

United’s sudden change in spirit should also give Fred, so stymied under Mourinho, the perfect platform from which to inflict damage against a Huddersfield side planning to sit back and keep things tight. The precision and flair of Juan Mata further up the pitch looks set to play an important part in unpicking Huddersfield’s back line – hopefully with the same intensity as Saturday.