Ole Gunnar Solskjaer looks set to make some adjustments to his starting XI for Manchester United’s meeting with AFC Bournemouth on Sunday.

The return of Anthony Martial from illness gives Solskjaer the chance to once again let loose the Frenchman, Jesse Lingard, Marcus Rashford and the rejuvenated Paul Pogba as an attacking quartet.

Alexis Sanchez and Romelu Lukaku are in contention to play the game, but it seems unlikely that either player will immediately return to the starting XI.

With that in mind, here is how we think Man United will line up against Eddie Howe’s side this weekend. 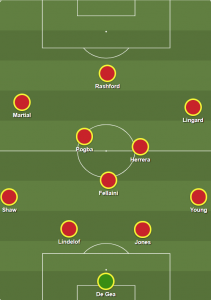 Ander Herrera was the midfielder rested on Boxing Day, so it seems logical that Nemanja Matic – an overworked player this season – drops out this time around in order to give Marouane Fellaini a chance to shine at the base of midfield in this new set-up.

Solskjaer will likewise give Ashley Young the nod over Diogo Dalot at right-back as he continues to rotate certain players throughout the busy festive period.

There is hot competition for places in that front three. Lukaku and Sanchez will be chomping at the bit to get back in this team, which suddenly looks like a lot of fun to play in. But as the boss himself noted on Friday, the pair must prove themselves first.

“I cannot do anything for their performances on the pitch; Paul has done it,” he said.

“I’m here to keep them on the path and it’s up to them when they get a chance – that’s the name of the game as a footballer.

“I gave some guidelines of course on expression, freedom of expression but that’s how I’ve always been as a manager – just enjoy playing for this club. That’s the best time of your life, but it’s not a bad time to be manager for a while.”