Ole Gunnar Solskjaer has taken the handbrake off this Manchester United team and they are playing with a sense freedom and endeavour not seen since the Sir Alex Ferguson era.

And the Norwegian, ahead of Man United’s trip to Newcastle on Wednesday, will be determined to reintegrate two highly talented yet much maligned members of the squad: Romelu Lukaku and Alexis Sanchez.

With that in mind, here is a potential XI for the meeting with Rafa Benitez’s men. 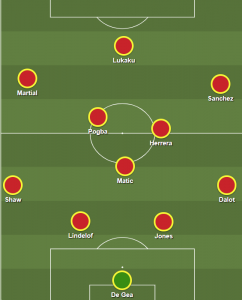 Lukaku entered the frame against AFC Bournemouth, scoring his side’s fourth just 161 seconds after coming on, and may well have the perfect chance to reassert himself at the masthead of attack should Marcus Rashford miss the Newcastle game with the groin injury sustained during a sensational display on Sunday.

That the Belgian, with only two goals since September prior to his appearance against Bournemouth, immediately hit the ground running will have Sanchez licking his lips.

He may have looked lost on the pitch under Mourinho but, should he assume Lingard’s role in the team, the forward will be in dreamland: attacking aggressively down the middle in the final third, movement happening on either side, quick and precise passing, floating crosses to Lukaku and Paul Pogba, and of course scoring goals.

Another resurgence for a player who struggled under Mourinho may well be on the way.