Ole Gunnar Solskjaer will want to rest a number of key players for Manchester United’s FA Cup meeting with Championship side Reading this weekend.

The festive period has seen Man United play a total of nine games in the space of a month, including four games over last 12 days.

Saturday’s meeting with Reading, therefore, gives a number of fringe players the chance to profit from the spirit of goodwill pervading the club since Solskjaer arrived.

With that in mind, here is a potential XI for the FA Cup third round clash with José Manuel Gomes’ team. 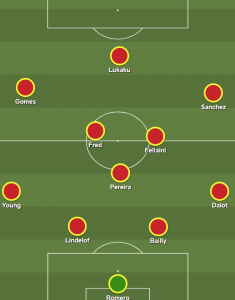 Angel Gomes was handed just his second ever Premier League appearance during the 3-1 win over Huddersfield Town – his other was given by Jose Mourinho when the 55-year-old picked a team riddled with youngsters – and the teenager did not look out of place. Supporters would fall even further in love with Solksjaer should he give Gomes his full senior debut. The kid deserves it.

Further back, a wholesale midfield change ahead of the meeting with Tottenham Hotspur at Wembley could mean Andreas Pereria gets a chance to impress at the base of midfield, while Fred – now playing under a forward-thinking system – adopting the Paul Pogba role. It is time he was properly inducted into this team after a prolonged period of struggle.