Ole Gunnar Solskjaer made a total of nine changes for Manchester United’s 2-0 win over Reading in the FA Cup third round over the weekend.

And it was therefore understandable that the team fielded produced something of a stilted performance, killing the game before half time but somewhat lacking in overall conviction.

Solskjaer will need his best and most energised XI if Man United are to claim a result against Mauricio Pochettino’s rampant Tottenham Hotspur side at Wembley.

With that in mind, here is how the 45-year-old will, based on his first five games, want to line up next Sunday. 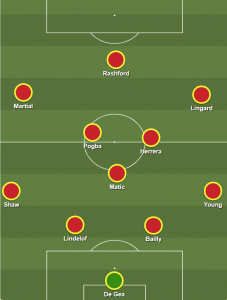 Saturday’s victory demonstrated an evident divide in quality and connection between Solskjaer’s first choice XI and the second string – a line which was more blurred under Jose Mourinho. There were no certainly performers against Reading who looked as if they justified a place against Tottenham.

Players like Romelu Lukaku, Alexis Sanchez, Fred and Diogo Dalot will need further minutes to find their flow, and Solskjaer knows this. For now, though, as United work hard in the Dubai heat until Thursday, the above team is developing a kind of chemistry not seen for years at Old Trafford. It must be allowed to continue in a truly difficult game.