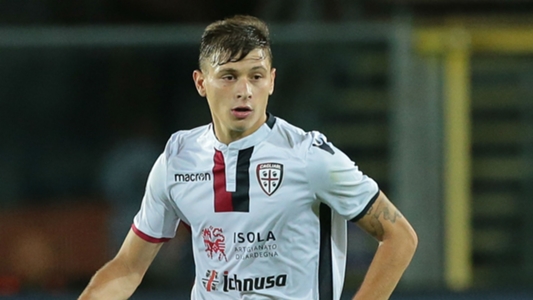 Manchester United have made a £30m take-it-or-leave-it offer to Serie A side Cagliari for midfielder Nicolo Barella, according to reports from Italy.

The club signed Fred from Shakhtar Donetsk over the summer but midfielders Ander Herrera and Andreas Pereira are both out of contract in the summer.

Barella, named best young Italian player born in 1997 for consecutive years between 2012 and 2013, has also attracted interest from Chelsea, who will look to replace the outgoing Cesc Fabregas this month.

And according to Italian media outlet Corriere dello Sport, Man United have made an offer of £30m and will not enter a process of haggling with Cagliari.

United are reluctant to spend in January, with Ed Woodward wary of the inflated prices in the market at this time of year, and ought to hold off until June before making any concrete personnel decisions. A director of football and, of course, new manager must be the main priorities.

If the opportunity arises, however, then signing the 21-year-old could prove a masterstroke: Barella can be a driving presence down the middle in counter-attacks, moving the ball quickly through the lines and often carrying the ball himself into the final third.

But with Solskjaer seemingly settling on a midfield trio of Paul Pogba, Ander Herrera and Nemanja Matic, the Italian midfielder may be reluctant to swap regular game-time in Serie A for uncertainty at Old Trafford under a caretaker manager.

Dean Henderson is prepared to stay at Manchester...