That the Norwegian, after just five games, has found his best team already demonstrates the sheer contrast with the toxicity of Jose Mourinho, who never trusted his players enough to cultivate ‘first choice’ group of players.

He would have worked on a number of key principles during Man United’s time in Dubai ahead of meeting Mauricio Pochettino’s side. The front three of Jesse Lingard, Anthony Martial and Marcus Rashford will be expected to deliver a fast, precise approach in the final third.

With that in mind, here is how we think United will line up for Tottenham on Sunday. 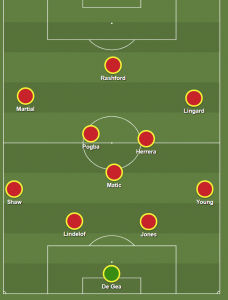 Solskjaer has endeared himself to supporters by getting this team playing forwards and with aggression once more, a strategy which allowed for Man United to claim five wins against five opponents they should beat quite easily.

He will need more from his team at Wembley. The midfield, for one thing, has to transition the ball faster than Spurs do to avoid losing momentum, which isn’t easy. And the defence – still notably shaky – must perform way above the standards set this season if they are to keep out the likes of Harry Kane, Christian Eriksen and Son Heung-Min.