Home » Arsenal vs Manchester United: Potential XI with three at the back

Arsenal vs Manchester United: Potential XI with three at the back

Manchester United overran Arsenal’s midfield during the first half of their 3-1 win at the Emirates back in December 2017.

And Ole Gunnar Solskjaer, who produced a watertight tactical plan to beat Tottenham Hotspur, must be thinking he can best trouble Arsenal in the same way.

He may be reluctant to change the structure of his line up but last season’s blueprint laid down by Jose Mourinho was too effective to ignore.

With that in mind, here is an alternative kind of starting XI for the trip to the Emirates on Friday. 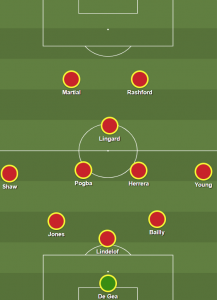 Arsenal have become more of a pressing side under Unai Emery, which makes the deployment of wing-backs a savvy move, so long as it is executed well.

If Man United, like they did on their last Emirates visit, can use the wing-backs and midfielders to effectively press the likes of Granit Xhaka and Lucas Torreira high up the pitch, all sorts of gaps will open up for them to expose the pace of Marcus Rashford, Jesse Lingard and Anthony Martial up against Arsenal’s back four.

Deploying a traditional defence runs the risk of inviting Arsenal forward and into key areas too easily. Solskjaer can make things awkward for Emery’s side from the very start by adopting a set-up he perhaps would not expect.