Ole Gunnar Solskjaer will make notable changes from the Manchester United side which won 3-1 at Arsenal for Tuesday’s meeting with Burnley in the Premier League.

Anthony Martial and Marcus Rashford, both rested at the Emirates, look set for a return to the starting XI. Jesse Lingard could get a rest following his heroics on Friday, paving the way for Alexis Sanchez to have another chance to impress.

Solksjaer will be reluctant to alter his midfield three but, with so many big games on the horizon, knows he has little choice. Fred looks likely to start his first Premier League game since Boxing Day.

With that in mind, here is how we think Man United will line up for the clash with Sean Dyche’s men. 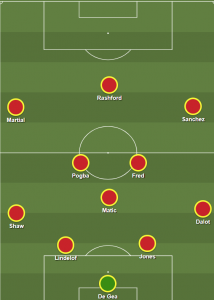 Eric Bailly performed well against Arsenal but Solskjaer will be wary of over-playing the injury-prone defender. Phil Jones will come back in alongside the imperious Victor Lindelof.

Elsewhere, following a pair of unconvincing displays at right-back from Ashley Young against Brighton and Arsenal, perhaps now is a good time to give Diogo Dalot a chance to show what he can do against an opponent which will sit back in numbers.