Ole Gunnar Solskjaer will drop both Romelu Lukaku and Juan Mata from the starting XI for Manchester United’s visit to Leicester City in the Premier League this Sunday.

The pair failed to have an impact in a game which saw Man United fail to bring their usual attacking rhythm, with the introduction of Jesse Lingard and Alexis Sanchez – along with moving Marcus Rashford back to No.9 – having a notable impact as the home side chased the game.

Andreas Pereira will be another player who drops out after he failed to serve as a meaningful alternative to Ander Herrera against Burnley.

With that in mind, here is how we think Man United will line up against Claude Puel’s side on Sunday afternoon. 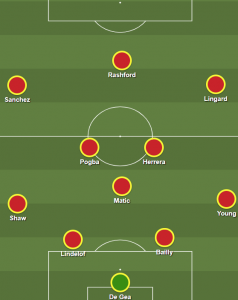 Solskjaer confirmed Anthony Martial would return to the squad after missing the Burnley game through injury but it seems likely he will have to settle for a spot on the bench.

Sanchez showed signs of real promise at the Emirates last week, scoring a magnificent goal to put Man United ahead, and would benefit from a steady progression of appearances as he works his way back up to fitness.

United’s caretaker manager will want his team to be a lot more clinical against Leicester than they were on their previous visit to the King Power, where they missed a host of chances to make it 3-1 and conceded an injury time equaliser.