Anthony Martial has issued a surprising public apology to family members, especially his fiancée Melanie, over recent ‘evil’ actions in his private life.

The Frenchman arrived at Old Trafford in 2015 as a 19-year-old with a different fiancée, Samantha, with whom he had a child during his time in Monaco. She later came out in public accusing Martial of behaving unfaithfully and has since abandoned all contact with him.

Martial’s new fiancée gave birth to a daughter over the summer, prompting him to make an abrupt departure from Manchester United’s pre-season tour to be with Melanie – a move which caused a controversy with Jose Mourinho and the club.

He took to Instagram last night to publicly admit and express his regret for the ‘evil I have been able to do’ in recent months. 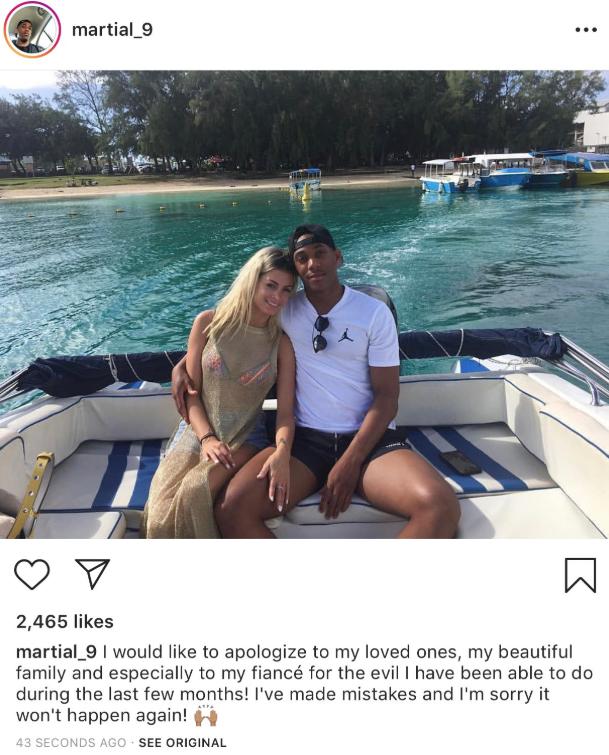 In fairness, what Martial did to Fulham’s defence the other day was an exhibition of real evil. Yes, those players have families, etc.

More seriously, though, it appears Martial has plunged himself into a private crisis similar to the one with Samantha which, as he admitted, hampered his form over Jose Mourinho‘s first season.

Producing a public apology, getting it out there in the open, may be the design of Melanie as a test of his mettle, his commitment. Perhaps it will work. Perhaps not. You can only hope as a United supporter that this doesn’t impact on how Martial performs on the pitch.