Manchester United are set to take on one of the best teams in Europe in the quarter-finals of the Champions League without two of their key midfielders.

Nemanja Matic and Ander Herrera are expected to not feature at all vs Barcelona while Marcus Rashford is a doubt.

Alexis Sanchez won’t be terribly missed but perhaps he would’ve wanted to carry out revenge on his former side.

Nonetheless, Ole Gunnar Solskjaer is about to embark on his first real test since being hired permanently and it doesn’t get much bigger than hosting Barcelona at Old Trafford.

With that in mind, here’s how we predict the Norwegian will set up his side: 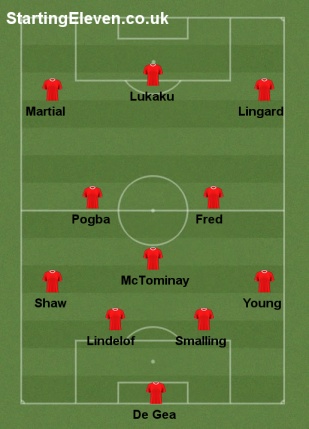 The back four are the usual suspects Solskjaer relies on while Scott McTominay and Fred will have to perform another Champions League miracle after their heroics against PSG.

Rashford is a doubt for the game so for that sake Romelu Lukaku will step in though it’d be tough to imagine he’d start if the former is fully fit.

Jesse Lingard is included on the right for his pace while Anthony Martial will hopefully shine from the left.

4-3-3 is the only way Manchester United can even attempt to match Barcelona’s midfield while simultaneously be able to counter-attack.