Home » Potential XI: How Manchester United could line up with Paulo Dybala

Potential XI: How Manchester United could line up with Paulo Dybala

Romelu Lukaku’s proposed move to Inter Milan was rocked last night by journalist Fabrizio Romano‘s claim that Juventus were willing to get involved.

According to Romano, Juventus would be willing to offload Paulo Dybala as part of a swap deal for Lukaku, with Inter reportedly falling short of United’s valuation of the player.

The report may well be designed to put pressure on Inter to meet United’s price, or it could mean there is an actual chance of Dybala coming to Old Trafford.

With that in mind, here are a couple of ideas regarding how Ole Gunnar Solskjaer might use Dybala should the Argentine sign. 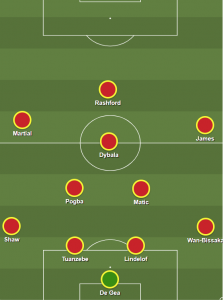 Solskjaer has predominantly used this counter-attacking 4-2-3-1 formation throughout pre-season, using Jesse Lingard as the springboard at No.10.

Dybala knows this set-up well, and could benefit from it handsomely if United’s passing improves in the final third. As things are, however, the diminutive forward may well find himself bogged down, at home, against weaker opposition with no momentum and therefore no channels to pass or run into.

The 4-2-3-1, when done nicely, gives you four attackers on four defenders at pace. When done poorly, it looks like a quagmire of dysfunction on the pitch.

Below is another suggestion. 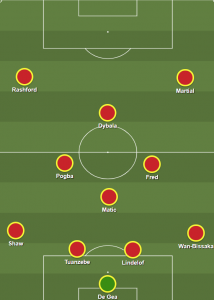 This one has the benefit of being more authentically counter-attacking and fluid, with Anthony Martial and Marcus Rashford doubling up as a front two which can turn into wide men, affording Dybala the chance to play as a false nine down the middle.

What this gives Dybala, more than anything, is exactly what makes him so dangerous: an ability to be seen by defenders as deeply unpredictable. Sometimes on the last line of defence, sometimes dropping deep to play with Paul Pogba, sometimes running directly in behind, making advantage of Rashford’s decoy runs.

However, this formation does put a lot of pressure on Dybala to make the right runs, to be the final difference in the last third (normally Pogba’s job). If he does not get it right – like Jesse Lingard in that same role against Barcelona – then the whole thing falls down.

D’Mani Mellor could head back out on loan...