Home » Manchester United vs Chelsea: Potential XI with Anthony Martial at No.9

Manchester United vs Chelsea: Potential XI with Anthony Martial at No.9

Manchester United meet Chelsea at Old Trafford on Sunday for the showpiece event of the Premier League opening weekend.

Ole Gunnar Solskjaer‘s men will desperately want to forget their last outing at the Theatre of Dreams – a humiliating 0-2 defeat to an already relegated Cardiff side who outpassed and outplayed the hosts.

The Norwegian’s emphasis over the summer has been to play a high-pressing, counterattacking 4-2-3-1 whereby United win the ball high up the pitch and feed the ball in behind.

Here is, in my view, the formation which best suits this model, with Anthony Martial and Marcus Rashford interchanging up front. 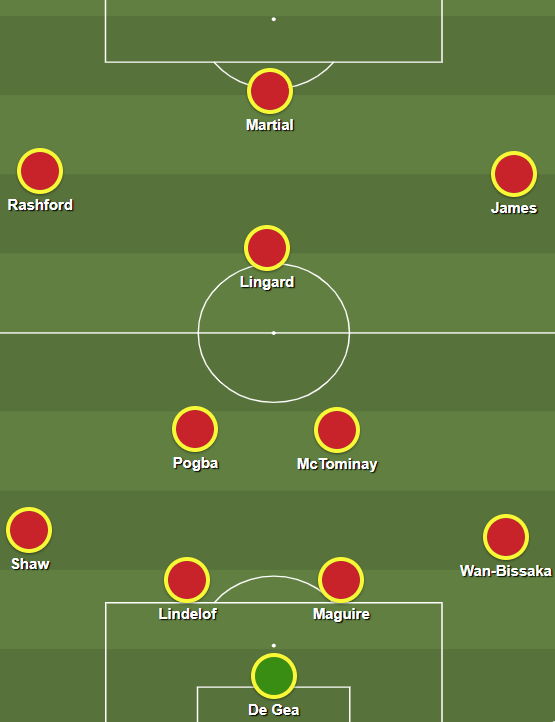 Despite winning all six pre-season games, the final touches to attacks often deserted United’s front four, but the basic movement was there.

Solskjaer wants to release Jesse Lingard from deep while the front three of Daniel James, Martial and Rashford make varied runs in behind the defence to receive the ball. This is also something which will help Paul Pogba – space further up the pitch to pass into.

Over pre-season, Martial has started at No.9 – something the Frenchman would have enjoyed since this has always been his favoured position. Solskjaer’s decision to revert the No.9 shirt back to Martial as well will, you suspect, serve as a powerful message of trust – one which the forward will look to pay back whilst on the pitch.