Manchester United are set to take on Chelsea at Old Trafford in their first Premier League fixture of the season.

Ole Gunnar Solskjaer has the difficult task of attempting to beat the Blues in order to avoid the negative mood surrounding the club from escalating further.

Although fans are pleased with the additions of Harry Maguire, Aaron Wan-Bissaka and Daniel James, there’s a general feeling that the board let down the legendary Norwegian manager in the transfer market.

Many believed at least two more signings were needed to make a real statement in the Premier League this season.

Either way, Solskjaer now has to take apart Frank Lampard’s Blues who will be keen of making a statement of their own so a 4-3-3 may be the best way to approach the crucial clash. 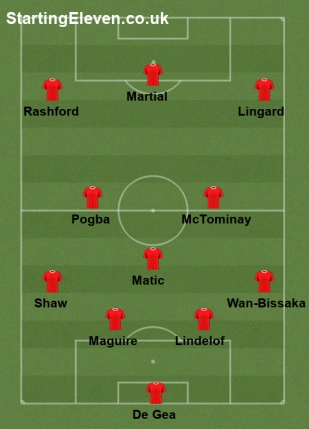 The back four essentially write themselves while Nemanja Matic‘s presence in midfield isn’t necessarily welcomed by supporters but it is necessary.

Scott McTominay has been impressive throughout the summer while Solskjaer could wait to blood Daniel James during less pressured circumstances.

Anthony Martial, Jesse Lingard and Marcus Rashford can all interchange and all three suit the former Molde man’s intense tactics.