Manchester United take on Southampton at St Mary’s in the Premier League on Saturday afternoon as Ole Gunnar Solskjaer‘s men look to bounce back from losing to Crystal Palace.

Goals from Andre Ayew and Patrick van Aanholt consigned Man United to their first defeat of the season and cast serious questions over the maturity of this current side.

But with Romelu Lukaku and Alexis Sanchez both at Inter Milan, along with Anthony Martial being injured, the young attacking players have to show greater cutting edge.

With that in mind, here is how we think United will line up for Saturday’s meeting with the Saints. 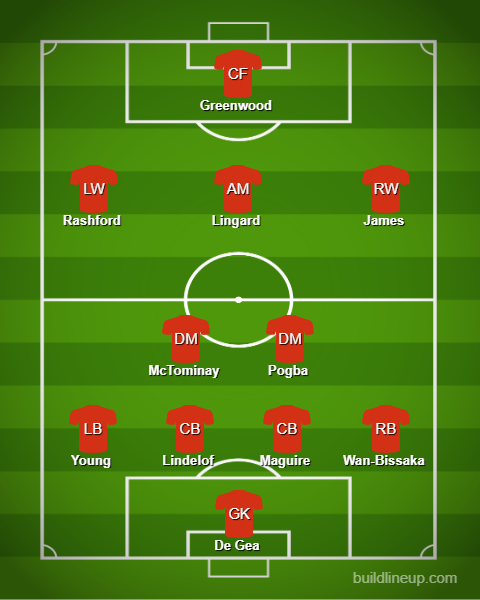 There were times against Crystal Palace when it seemed as if some players were… scared. Not the same kind of fear engendered by Jose Mourinho or Louis van Gaal, who demanded discipline above all, but more a kind of internal cooling system preventing players from passing with risk, from making daring runs, from shooting, even.

Solskjaer wants his players to attack and play with aggression but, against a low block at home, the team does not seem fully knowledgeable of how to do that exactly.

Reports have claimed that the youngster could start up-front and, despite being just 17, his presence could actually help others play with greater maturity.

Greenwood is an explosive player, one who plays with that special kind of zeal which only unblooded youngsters have, and that type of energy leading the line could be what makes the front six move a little faster, with a little less compunction.

This Solskjaer system, like most systems involving individuals, only works if the people fully believe in it. Last Saturday, that belief did not appear to be fully there. But Greenwood has it. He knows no other way.