Ole Gunnar Solskjaer‘s men have not won since that opening day 4-0 victory over Chelsea, with many key players failing to show their best.

As such, it would make sense for the Norweigian to be bold in his selection, perhaps even dropping a key player or two.

With that in mind, here is a potential XI for the game at Old Trafford on Saturday. 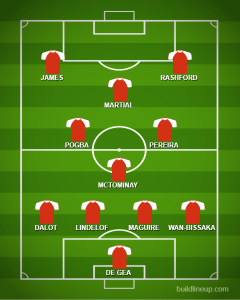 At home especially, United are finding it hard to break teams down, with visitors likely to play a low block and spring a trap on United when the time is right.

As a result, the runs from deep provided by Jesse Lingard are going nowhere. The Englishman has not scored since January. His assists are virtually non-existent. In the tight spaces and high-pressure environment of Old Trafford, United require more incision and less manic running, which is why a more balanced 4-1-2-1-2 makes greater sense than the counter-attacking 4-2-3-1 seen so far this term.

With Anthony Martial playing as a false nine, enabling Daniel James and Marcus Rashford to press high, the Frenchman – whose technical skillset is probably the best among the attackers save for Juan Mata – will be able to receive the ball in more useful areas with options around him.

Moreover, that midfield, which looked painfully one-dimensional last time out, is likely to benefit from a more balanced structure, with Andreas Pereira pressing from the front and Scott McTominay playing further back.

For a team which is not properly firing, Solskjaer must be ruthless with his selection and style.