Home » Manchester United vs Leicester City: Potential XI with three at the back

Manchester United vs Leicester City: Potential XI with three at the back

Ole Gunnar Solskjaer could make some fundamental changes to his starting XI for Manchester United’s clash with Leicester City on Saturday.

In response, Solskjaer has to look at both the skeleton and anatomy of this United lineup to see how he can get hold of the midfield battle against a strong Leicester side.

Here is how we think the Norwegian could set up for the game against Brendan Rodgers’ side. 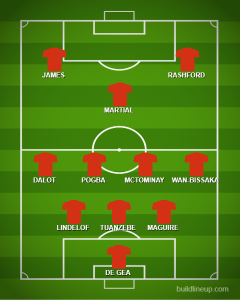 Immediately, there is more balance here: Axel Tuanzebe can have the role of recycling play as opposed to Scott McTominay, who is not suited to that kind of midfield function, enabling the Scot to play more of an ‘Ander Herrera‘ role instead.

The presence of Aaron Wan-Bissaka and Diogo Dalot as wing-backs, provided they are both fit, gives Paul Pogba more license to roam forward and muzzles Leicester’s midfield trio of Wilfried Ndidi, James Maddison and Youri Tielemans.

In turn, the attack can be more fluid, not forced to stay wide all the time, with Marcus Rashford and Daniel James interchanging as Anthony Martial, the most technically gifted of the three, fills the false nine role in order to take advantage of that gap between midfield and defence.