Mason Greenwood could be in line for another start for Manchester United against West Ham United on Sunday.

The 17-year-old scored his first senior goal for the club – a superb low finish after he had carved out a good position in the box – against Astana in the Europa League.

And with Marcus Rashford looking out of touch at number nine, combined with injuries to Anthony Martial and Daniel James, the teenager may well be in contention to feature.

With that in mind, here is how we think Ole Gunnar Solskjaer will line up at the London Stadium. 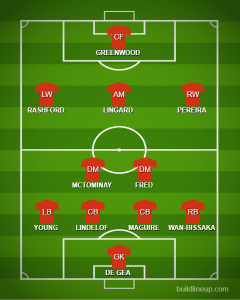 Initially, Greenwood played out on the right against Astana, with Rashford down the middle, but Solskjaer switched this around in the second half to great effect.

Rashford was able to get more touches on the ball and take the game to Astana, making inroads out wide to provide space for Greenwood, who seemed much more in tune with the game when playing in his favoured No.9 role.

And with nobody looking as if they were capable of finding a finish, it was Greenwood who unlocked the door. He deserves another chance to do it again against Manuel Pellegrini’s side.