Manchester United simply cannot afford to slip up once again when they take on Rochdale in the third round of the EFL Cup on Wednesday.

Ole Gunnar Solskjaer‘s side produced what was unquestionably the worst performance of the season as they lost 2-0 to West Ham United at the London Stadium.

The Man United boss will, at least, have the chance to blood some younger, less experienced names against Rochdale ahead of potentially using them against Arsenal.

With that in mind, here is how we think United will line up against the League One side. 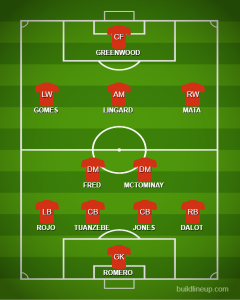 Mason Greenwood, first and foremost, comes back into that starting XI and straight into the number nine role, with no other United player seemingly able to find the net from open play at this moment in time.

Angel Gomes, too, simply must get 90 minutes against Rochdale – he could cause some genuine damage with his close control in tight areas alongside Jesse Lingard, who must use this game as a warm-up for his annual masterclass against Arsenal on Monday.

Further back, Diogo Dalot and Axel Tuanzebe really ought to be knocking on the door of Solskjaer’s first choice XI, and certainly deserve a chance to prove their worth in a side where nobody appears to be performing consistently.