Manchester United have a brilliant chance to change the mood among its dejected support by recording a convincing win over Arsenal.

Just like how that 4-0 win over Chelsea came out of nowhere, and with time has been made to seem even more inexplicable, the game with Unai Emery’s men could produce a similar mad outcome.

Indeed, with the right players on the pitch, a bit of luck, along with the requisite level of energy, this could be both an entertaining affair and a successful one against an Arsenal team which always has, and will on Monday, leave plenty of gaps.

With that in mind, here is what we think United’s best starting XI would look like. 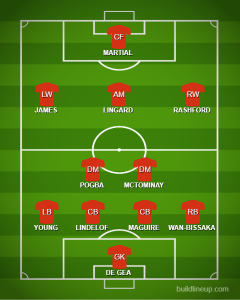 Firstly, yes, Jesse Lingard. Not scored since January but will, you can almost guarantee, enter full Lionel Messi mode for this one game alone against Arsenal – his dancefloor, his bunny, the team who never manage to escape his wrath.

With Anthony Martial expected to return to the side, Solskjaer has the opportunity to use the Frenchman in his favoured role – the number nine position, running the channels and entering the box from dangerous diagonal angles. For an attack which simply looks lost, the direct and sharp nature of the Frenchman’s running could serve as the ideal solution against the Gunners.