Manchester United once again have a mounting injury list ahead of meeting Arsenal at Old Trafford in the Premier League on Monday night.

Paul Pogba, Marcus Rashford, Anthony Martial, Luke Shaw, Phil Jones and Eric Bailly have all been confirmed as missing or huge doubts for the clash.

This once again means that Ole Gunnar Solskjaer has a decidedly barebones lineup to play with for what is a massive game against Unai Emery’s side.

Here is how we think United can best line up with the options at the Norwegian’s disposal. 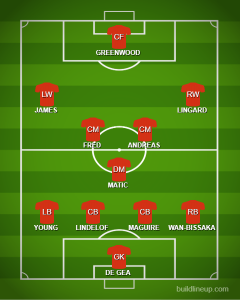 Three in midfield will automatically give United a bit more midfield control than what they have managed recently, with Andreas Pereira leading the press from the front whilst Fred plays the Pogba role, feeding in balls behind.

That front three is perhaps not the most experienced, with Greenwood making what would only be his second Premier League start and James still a slightly unknown quality, but those two have been the club’s most potent goal-threats so far this term.

And over on the right is somebody who, while seemingly universally disliked at the moment, is being tipped by this author to do something special against Arsenal: Jesse Lingard.

Having scored twice against them last season, the Englishman may well have another big display in store.