Sitting in eighth position and following a 2-0 defeat to West Ham United, defeat to the Gunners would set in motion a spiral of chaos and doom among the club’s support.

With that in mind, here is the starting XI that we think Solskjaer will put out against Unai Emery’s men. 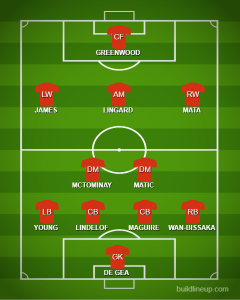 Firstly, yes, I know – this is not a good lineup. It lacks zip in midfield, contains two attacking players badly out of form and two other attackers yet to make ten senior starts for the club.

And yes, there is Ashley Young, once again, somehow still actually quite important to this team, partnered by Scott McTominay, full of aggression and power but painfully devoid of the cutting passes necessary to unpick this Arsenal defence. The other four are okay, although Victor Lindelof and Harry Maguire must improve from what we saw against West Ham – especially Andriy Yarmolenko’s goal.

In a way, though, it doesn’t matter. Remember that lineup against Arsenal in February 2016? Sometimes, when two banter clubs collide, the results can be, well, ‘banterous’. Both teams are capable of winning and losing this 4-0. It promises to be something you cannot take your eyes off.