Home » How Manchester United could line up with Erling Braut Haaland, Jadon Sancho

How Manchester United could line up with Erling Braut Haaland, Jadon Sancho

The former has 26 goals from 19 games already this season, while Sancho is quite obviously English football’s next superstar.

It has even been claimed that Man United, should the opportunity present itself, look to sign the pair over the January transfer window.

With that in mind, here is what United’s best XI would look like if the pair miraculously arrived in January. 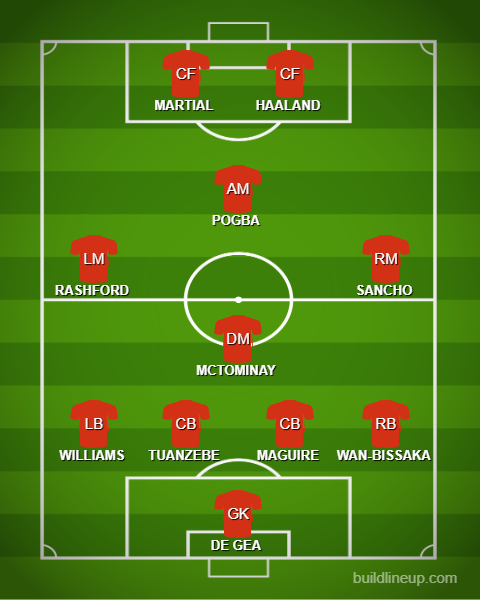 The main thing about all of this, actually, is Paul Pogba in that No.10 role.

By switching to a diamond when in possession, and more of a classic 4-4-2 without it, the Frenchman does not need to start transitions but instead put the finishing touches to them, feeding the strike partnership of Haaland and Anthony Martial while Sancho and Marcus Rashford provide cut and thrust from wide areas.

For a team often blamed for not creating enough chances, this attacking vanguard will carve out gaps if United as a whole pass quickly and press as a unit. Should this group get the chance to understand each other, the movement and quality in the final third will markedly improve.