Ole Gunnar Solskjaer has taken 14 academy youngsters to Kazakhstan for Manchester United’s meeting with Astana in the Europa League on Thursday.

The Norwegian confirmed ahead of the game that four players will make their senior debuts for United: Dylan Levitt, James Garner, Di’Shon Bernard and Lee Grant.

In a dead rubber played in a location that is closer to Hong Kong than Manchester, it is difficult to know what exactly one can expect from the game.

Here is how we think United will line up for this meeting with the Kazahktani champions. 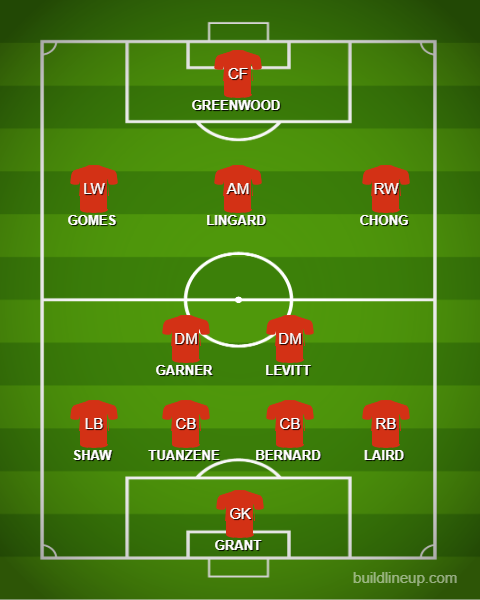 What will be most interesting, to me at least, is how Laird gets on at right-back. Aaron Wan-Bissaka has been wonderfully solid this season but Laird, a more attack-minded player, could end up serving as the perfect understudy, thereby pushing Ashley Young out of contention for that spot altogether.

While the attacking quartet is largely well known, what of that midfield? Garner, as we have seen, is a stabilising, metronomic presence, but Levitt is a more propulsive player – somebody who likes to move quickly through the lines. It is noteworthy that Ryan Giggs has recently included him in the senior Wales squad. Alongside Garner, United could have the ideal balance.