Home » Manchester United vs. Tottenham Hotspur: Potential XI with three at the back

Manchester United vs. Tottenham Hotspur: Potential XI with three at the back

The idea of Jose Mourinho coming to Old Trafford and beating Manchester United is a very real and imminent threat.

Ole Gunnar Solskjaer‘s side have won four of their 14 Premier League games so far this term, while Tottenham Hotspur have claimed three consecutive wins since Mourinho arrived.

There are very few things that appeal less than Mourinho’s Spurs running riot at the Theatre of Dreams, and as such, Solskjaer needs a plan.

And in that spirit, here is an XI that could, maybe, stifle this game. 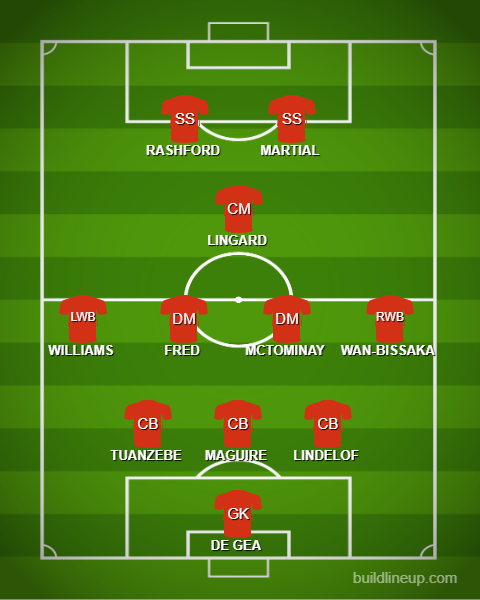 The main problem for United against Aston Villa – and there were many – was that the midfielders Fred and Andreas Pereira often received the ball with very little options around them due to them being in a midfield pivot, which ultimately meant that they needed to pass wide or backward.

That is one of the main reasons why 4-2-3-1, under Mourinho and Solskjaer, has often failed to work, and in a game played at a very high intensity, it will certainly not work against an organised and energised Spurs side.

Switching to four across the midfield opens up new passing lanes, squeezing the space in behind United’s defence and, you would hope, encourages Fred and Scott McTominay (should he return) to play the ball into the No.10, with both wing-backs dragging Spurs players a bit wider compared with the press Villa were able to put on from minute one.

When your midfield is struggling, you have to support them by giving them different angles – and a system that, by its very nature, demands more movement up front.

Solskjaer needs to learn from Sunday’s mistake. This formation would be a way of doing just that.