After a great European night on Thursday, Manchester United are back to Premier League action with a home match against Everton on Sunday.

Having won three games on the bounce, Ole Gunnar Solskjaer‘s side will want to keep the momentum going and gain three points against struggling Everton, who are only two points off the relegation zone and who have conceded 28 Premier League goals already this season.

The manager is hoping Jesse Lingard will be fit after sustaining a knock in the Manchester derby on Sunday, but that will depend on whether he comes through training successfully today. Paul Pogba is definitely ruled out but is expected to start training with the team again this week.

Mason Greenwood could feature in Solskjaer’s plans having scored an impressive brace against AZ on Thursday. However, he is more likely to start once again on the bench, unless Lingard doesn’t recover in time and the manager switches to more of an attacking 4-2-4 formation.

The fierce three-way competition for the left back position will probably see Luke Shaw returning to the starting line-up, with Brandon Williams dropping back down to the bench.

So, assuming Lingard doesn’t recover in time, here is how we think United will line up for the game against the Toffees. 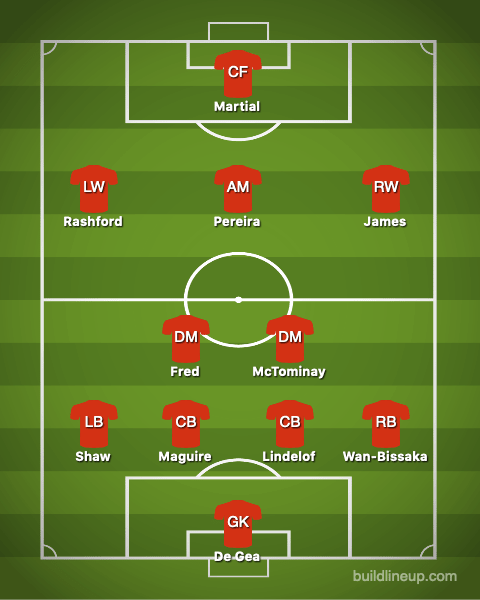