Home » Predicted XI: Watford vs. Manchester United – Is there a place for Greenwood?

Predicted XI: Watford vs. Manchester United – Is there a place for Greenwood?

It’s back to the Premier League for Ole Gunnar Solskjaer‘s men on Sunday with a tricky trip to North London to face Watford.

No new injury problems have been reported although Paul Pogba, Tim Fosu-Mensah and Eric Bailly are still ruled out.

Marcos Rojo and Diogo Dalot are also unlikely to feature, although the latter may make the bench after coming through 70 minutes of United’s Under-18s match on Friday.

Solskjaer is likely to return to his preferred line-up having rested several players during the midweek Carabao Cup game with Colchester.

Luke Shaw appears to be the manager’s clear first choice at left back and is likely to continue. Likewise, Victor Lindelof is set to play despite some recent shaky performances and an own goal against Everton. Despite a clean sheet against Colchester, Axel Tuanzebe will probably therefore miss out.

The only question mark over the selection is likely to be whether the boss will be tempted to give Mason Greenwood a starting berth after his excellent recent performances. Jesse Lingard would be the most likely player to make way, with Anthony Martial dropping back into the hole behind Greenwood at centre forward. We think though it will be business as usual with Greenwood getting 20-30 minutes off the bench.

This, therefore is our predicted starting XI: 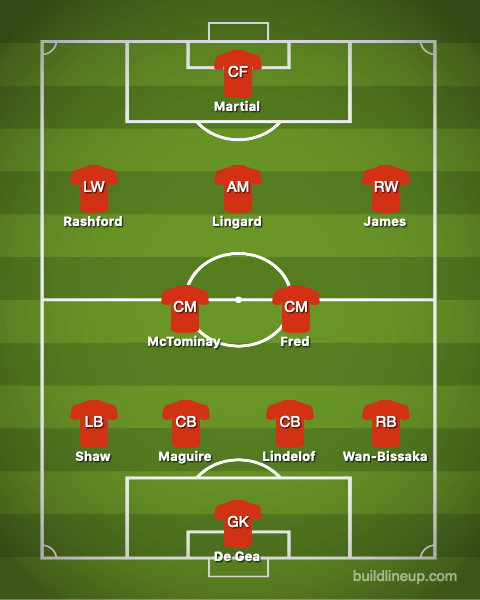