Olé Gunnar Solskjaer will be looking for a response from his team after two poor Premier League performances.

The manager kept the same team for the Watford game that failed to beat Everton and will surely now ring the changes.

Unless there is a real setback in his recovery, Paul Pogba is almost certain to start his first game since September. The question is, who will make way? Jesse Lingard is the most likely, which will either mean Pogba playing further forward than normal in the number 10 position, or Solskjaer changing from a 4-2-3-1 formation to 4-3-3.

David de Gea will almost certainly keep his place despite two costly errors in consecutive games. However, the manager might want to reshuffle his leaking defence.

Axel Tuanzebe would have been an option to replace the erratic Victor Lindelof, but the 22-year-old suffered a minor hamstring injury in the Carabao Cup game against Colchester and faces a late fitness test. Lindelof may therefore escape the chop.

With a sacrificial lamb needed, the most likely defender to give way may be Luke Shaw, with either Ashley Young or Brandon Williams being recalled to replace him.

It may also finally be time for Mason Greenwood to be given 90 minutes on the front line, with Daniel James the most likely to be rested. Solskjaer also switched Anthony Martial and Rashford in the second half against Watford and may continue that experiment, but we think he will give Martial at least one more chance at centre forward. 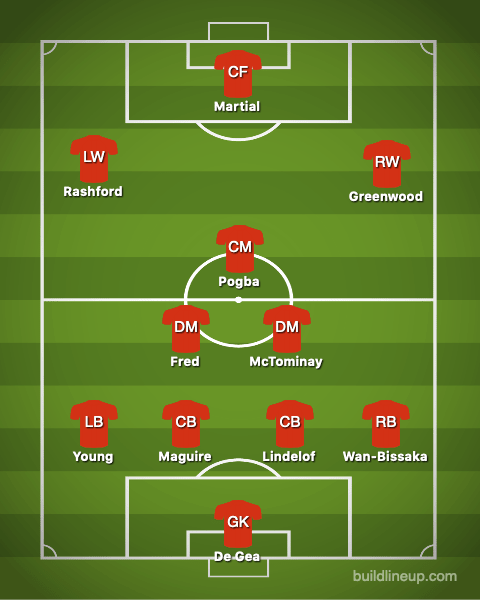