The deadlock has finally been broken in the protracted Bruno Fernandes transfer saga as Manchester United have increased their offer for the player by €5 million (£4.2 million), according to Portuguese outlet Record.

As reported here yesterday, after a period of deadlock in which the deal appeared to be dead in the water, negotiations resumed on Friday between the Red Devils, Sporting Lisbon, the player’s agent Miguel Pinho and intermediary superagent Jorge Mendes.

The talks resulted in United submitting an improved offer of €55 million (£46.4 million) plus bonuses for the 25-year-old.

The Old Trafford negotiators had previously refused to go above €50 million (£42.2 million) plus bonuses, with Sporting’s bottom line remaining at €60 million (£50.7 million), with an overall deal value with add-ons of €70 million (£59.1 million).

Whilst the new figure is still €5 million below Sporting’s minimum, Record says that the Lions’ president Frederico Varandas is now ‘studying which individual or collective variables that he wants to include in the deal in order to reach this sum [of €70 million]’.

Record says that ‘the ball is now in Sporting’s court’. 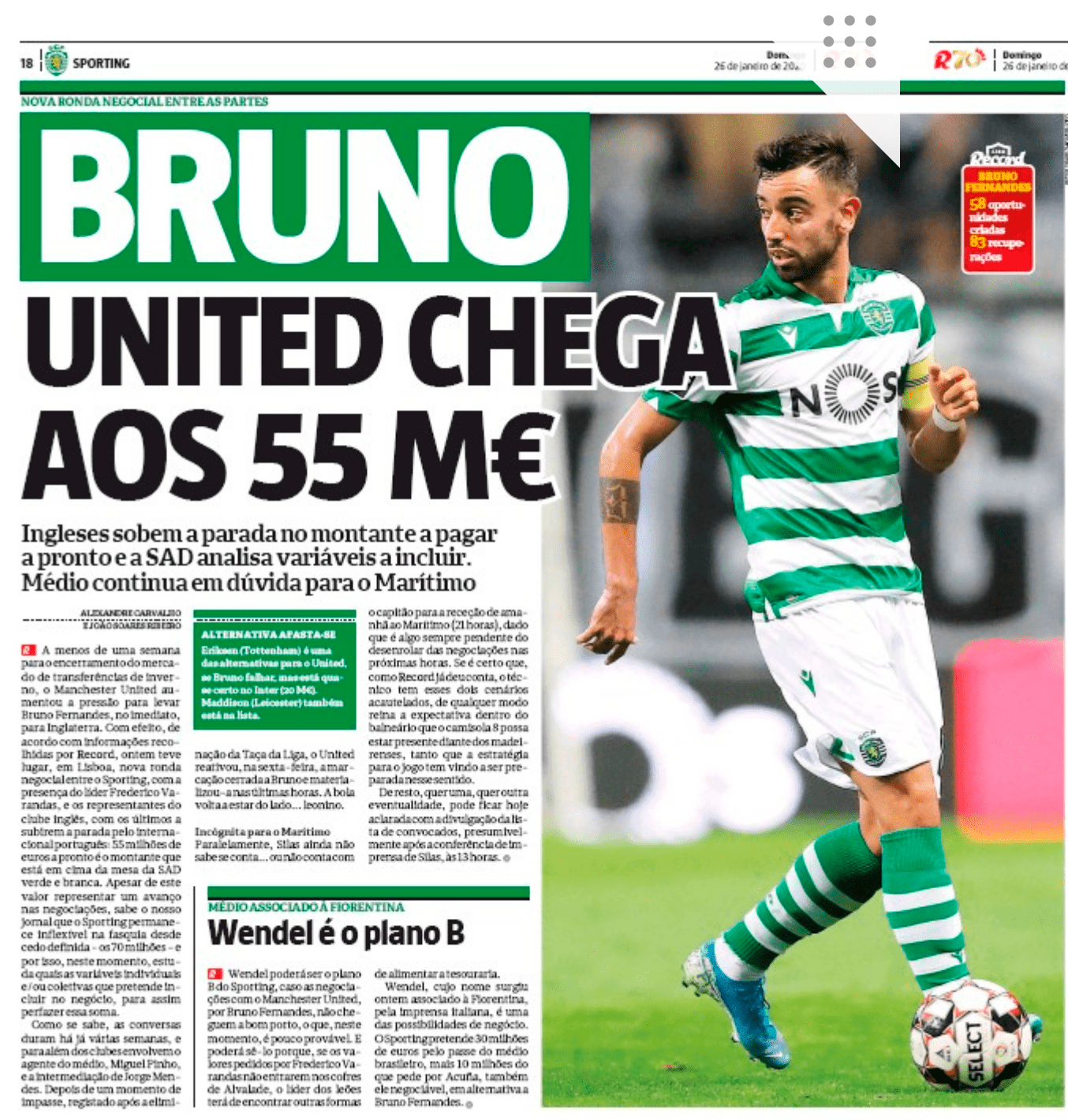 Meanwhile O Jogo has rubbished reports circulating in the English press that there is a clause in Fernandes’ contract stipulating that any offer of €50 million or more for the player would mean that his agent must be paid a fee of €5 million. This was true of the midfielder’s previous contract, although the trigger value was €35 million rather than €50 million, but was removed when Fernandes signed a new deal with the Lions in November.

The reports, therefore, that United had lowered their bid upon learning about the clause are false.

There is now reason to be optimistic that a deal could be concluded soon. Whilst the Reds are still €5 million below Sporting’s minimum flat fee, the fact that Varandas is studying the add-ons suggests that it is a figure the Lisbon club might be prepared to accept if those bonus values can be ironed out. The Sun also believes that the Portuguese club is now willing to compromise.

All the major Portuguese outlets are reporting in unison that the talks are back on and that the Lions’ head coach Jorge Silas has prepared a Plan B for tomorrow’s game against Maritimo that does not include Bruno. With the player desperate to move and United’s executive vice chairman Ed Woodward in dire need of some positive publicity, it is clearly in everyone’s interests to find a compromise and bring these painfully drawn out negotiations to a successful conclusion.