With Nemanja Matic a major doubt for tomorrow’s game at the Etihad, Olé Gunnar Solskjaer has run out of midfield options altogether, with only Fred left to hold the fort.

We think that as United need to overturn a two goal deficit in this Carabao Cup semi-final second leg, if the Serbian doesn’t make it, Ole Gunnar Solskjaer will have little option to go for it and field an attacking formation.

The manager will probably stick to three at the back to try to stifle City’s attacking trio, which may be Raheem Sterling, Sergio Aguero and Bernado Silva. It’s unlikely he’ll throw the fit-again Eric Bailly straight into such a crucial tie and so will stick with Phil Jones alongside Maguire and Lindelof.

Despite Diogo Dalot’s fine performance against Tranmere, Aaron Wan-Bissaka is expected to be recalled to the right wing back position with either Luke Shaw or Brandon Williams occupying the left flank.

Fred would then sit in central midfield, with Andreas Pereira on the right, Juan Mata at number 10 and Dan James on the left.

Anthony Martial will be preferred to the prolific Mason Greenwood up front. 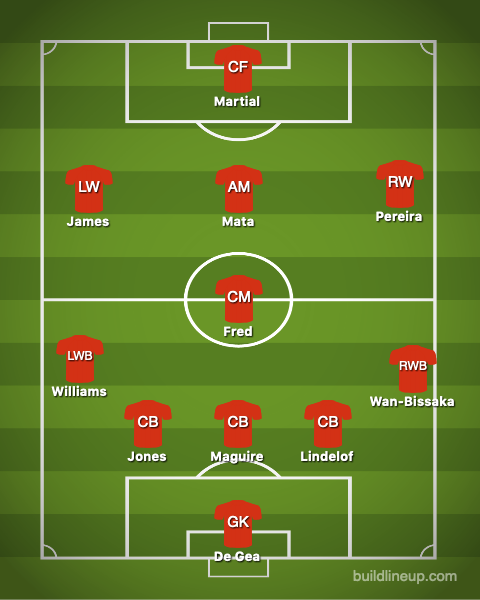