Manchester United’s Under 18’s starlet Hannibal Mejbri is already catching the attention of some of Britain’s top football journalists.

The Red Devils spent just under £10 million to sign the then 16-year-old from Monaco in August.

With a wild afro haircut and tall frame not unlike that of Tahith Chong, the young Frenchman has impressed so far in his first 6 months at Old Trafford playing primarily in the number 10 role for the Under 18’s.

He has already also represented the Reds at Under 23 level, playing five times and registering 3 assists and as reported here, Head of first team development Nicky Butt has singled him out for praise this week, saying that he is ‘a leader. The way he plays his football is 100mph, he’s non-stop running up and down.’

The Times’ Paul Hirst watched Mejbri in United’s Youth Cup match against Leeds on Wednesday. ‘Mejbri’s balance was exceptional, as was his range of passing…[he] is showing signs that he is the real deal.’

The Independent’s Mark Critchley was also impressed by the youngster’s performance. ‘Watching him on Wednesday night, it is easy to see why there is confidence at Old Trafford that they have acquired a special talent. Adept at collecting and retaining possession in tight spaces…For a typically languid playmaker, he is proactive when it comes to his defensive duties and winning the ball back high up the pitch.’

Mejbri has also shown a positive attitude when dealing with a hostile crowd. After being taunted with chants of ‘Sideshow Bob is f—— s—‘ by 1,400 Leeds fans, he responded with humour on Instagram, with a post saying ‘I admit there is a small resemblance’. 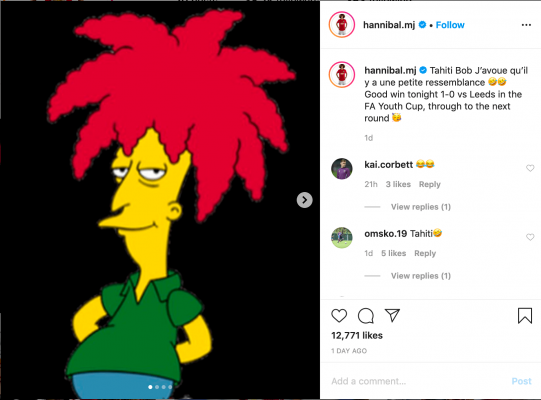 Despite United’s obvious need for fresh blood to bolster a struggling and injury-ravaged side, it may be a little too soon for Mejbri, who only turned 17 last month, to be called up to the first team. But Olé Gunnar Solskjaer, who was also sitting in the stands on Wednesday, must certainly be tempted.