Eleven free transfers that Man United could land in summer

We all know how loath Ed Woodward and the Glazers are to spend money, so we thought it would be useful to draw their attention to players who might be available for nothing in the summer.

With the clock ticking, here’s our pick of the bunch of players who are yet to sign a new contract at their current clubs and who could become free agents in June.

1. Walter Benitez (OGC Nice) – Goalkeeper
With Sergio Romero reportedly looking to move on in search of regular first team football and Lee Grant retiring, the Red Devils may look for goalkeeping reinforcements this summer. Ironically Romero’s compatriot, 27-year-old record shot stopper Benitez, has expressed a desire to play in the Premier League to boost his chances of ousting the 32-year-old from the Argentinian number one spot.

2. Thomas Meunier (PSG) – Right back
Although in Aaron Wan-Bissaka and Diogo Dalot United have good options at right back, it could still be tempting to make a move for the Belgian if he doesn’t put pen to paper on a new contract at PSG. Considered one of the best full backs in the world and with a market value of £25 million, Meunier would add unquestionable quality to United’s defensive roster.

3. Jan Vertonghen (Spurs) – Centre Back
Despite being keen to stay at Tottenham, the Belgian has not been offered a contract renewal yet by the club. If José Mourinho is looking to refresh his centre back options, the 32-year-old might have no option but to look for pastures new. He is an excellent ball-playing centre back with extensive Premier League experience, and if Chris Smalling and Marcos Rojo’s loan deals become permanent there could be space at Old Trafford for a defender of Vertonghen’s calibre.

4. Malang Sarr (OGC Nice) – Centre Back
The 21-year-old is a highly regarded young centre-back who has been a regular starter for Nice for over three seasons. With a market value of £15 million he is a player that United might believe they can bring on to the next level.

5. Layvin Kurzawa (PSG) – Left Back
Again, the Red Devils have an embarrassment of riches at left back with Luke Shaw and Brandon Williams, but at 27, the Frenchman could provide a quality, experienced third option. His signing would also be getting one over on rivals Arsenal, who have reportedly been chasing his signature.

6. Willian (Chelsea) – Right wing
Whilst now the wrong side of 30, Willian can still turn a trick or two and could finally end United’s long term search for a natural right winger. With a market value still of £27 million, Woodward will surely be keeping tabs on the Brazilian’s situation over the coming months. While the player has consistently said he’d like to stay at Stamford Bridge, Frank Lampard is thought to want to bring a new generation through and to date, the club have shown no sign of offering the 31-year-old a contract.

7. David Silva (Man City) – Central Midfielder
Silva made it clear a long time ago that his current contract would be his last at the Etihad and that he would go in search of a new challenge this summer. Of course, the Spaniard vowed not to move to another Premier League club, but could United persuade him to change his mind and gain his valuable experience on a short-term contract? Stranger things have happened.

8. Adam Lallana (Liverpool) – Attacking Midfielder
At 31, Lallana is entering the twilight years of his career but as he has shown at Liverpool, he can still be a very effective weapon coming off the bench. However, he reportedly wants to leave Liverpool to get regular starts and it’s unlikely he’d get a guaranteed first eleven berth at Old Trafford. Whether rotational game time at United would appeal to him and whether the club see him as a viable addition to the squad remains to be seen.

9. Ryan Fraser (Bournemouth) – Left wing
Another winger that the Red Devils could snap up for nothing is the 25-year-old Bournemouth man. Eddie Howe has admitted that Fraser is ‘keeping his options open’ despite the club’s best efforts to keep him. Rumour has it that Liverpool is the player’s preferred destination, but the Red Devils could see the Scotsman as a useful squad player to have around.

10. Mario Goetze (Borussia Dortmund) – Centre forward/Attacking midfielder
World cup winning goalscorer Goetze has found himself on the Dortmund bench for most of this season. There may be a silver lining to the cloud of losing Erling Braut Haaland to Dortmund if it clinches Goetze’s decision to move on – and Old Trafford could be an excellent fit for the 27-year-old.

11. Dries Mertens (Napoli) – Centre Forward/Second striker
Both United and Chelsea were linked with a January move for Mertens after rumours emerged of a dressing room feud at Napoli. Despite the feud reportedly being patched up and the 28-year-old deciding to see out the season in Naples, he still hasn’t put pen to paper on a new deal and could be a bargain signing in June. 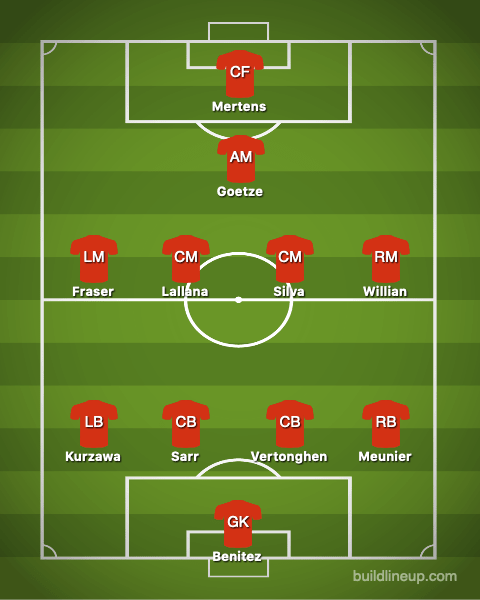 Fabrizio Romano: Man United “have been informed” about...