Manchester United’s loanee goalkeeper Dean Henderson has been better than David de Gea in every major measured statistic this season according to statistics published in The Sun.

First, Henderson has nine clean sheets versus de Gea’s five, a figure that puts him at the top of the goalkeeping charts along with Burnley’s Nick Pope and Liverpool’s Alisson Becker.

And whilst the number of clean sheets depends as much on the rest of the defence as it does on the keeper, save percentage gives a clearer indication of goalkeeping ability. And in this statistic the 22-year-old also ranks higher than the Spaniard, with 75% versus 69.15%.

The Englishman has managed to catch the ball four times more than de Gea, with twelve catches to just three. And finally, Henderson has performed sweeping duties on five occasions compared with the 29-year-old’s three. 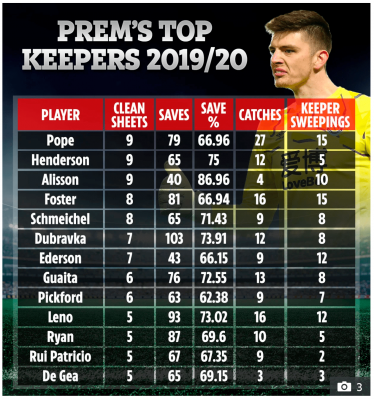 Henderson’s form while on loan at Sheffield United has been impressive and has helped the Blades into an incredible fifth spot in the Premier League – three above the Reds.

Overall, the Sheffield club have let in five goals fewer than United, and only Liverpool have managed to put more than one past them this year.

Sheffield United have played six Premier League game in 2020. Only Liverpool (2) have scored more than once against them.

The Whitehaven-born keeper’s performances have forced him into Gareth Southgate’s England squad and a debut at senior level is expected to come soon as the team prepares for Euro 2020.

‘The big dream is to play for Manchester United one day’ said the young star in a recent TV interview. ‘I’ve always had that dream throughout my life so until that’s accomplished I’ll never think I’ve made it.’

With salaries of £25,000 versus £375,000 per week, the Red Devils could potentially save £18 million a season by replacing de Gea with Henderson. And with Ole Gunnar Solskjaer’s preference for home-grown players, those in power at Old Trafford must be seriously considering making the 22-year-old’s dream a reality.