Manchester United’s net spending since Ed Woodward took over as executive vice chairman of the club has been the second highest in the world.

Since Woodward took the reins in 2012, United’s net spend figure – which represents transfers in minus transfers out – has been £826.97 million, second only to Manchester City. Chelsea’s, by comparison, has been £256.67m and Real Madrid’s has been £297.80m.

The outlay has not brought success. In the eight years that Woodward has been at the helm, the Red Devils have won just one Premier League title (when David Gill was still at the club), one FA Cup, one Europa League and one League Cup – a dreadful return on such a huge investment. 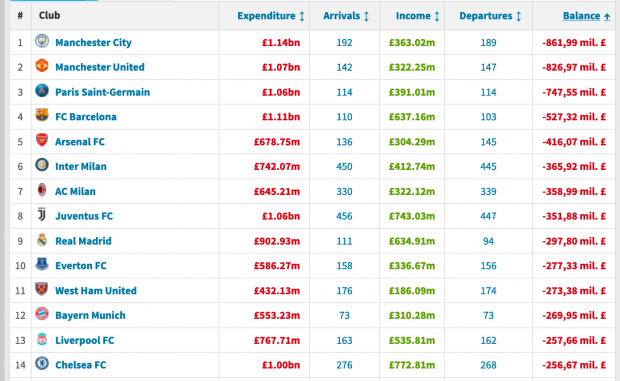 In terms just of incoming transfers during that time, United rank third behind City and Barcelona with £1.07 billion – a figure higher than those of Chelsea, Real Madrid, Paris St Germain and Juventus.

By contrast, the club has performed poorly during that time in terms of player sales. Whilst clubs such as Monaco and Benfica amassed sums of £855.25 million and £790.02 million respectively from transfer revenue, United are ranked 28th for the period with £322.25 million. This is below the likes of Villareal, Genoa, Sampdoria and Southampton. What is more, £56.7 million of that figure represents the sale of Angel Di Maria to PSG – a player bought for £67.5 million just 12 months prior.

The 48-year-old said at the recent fans’ forum that ‘There has been extensive work on our recruitment process, with considerable investment in scouting, data and analytics. The Recruitment Department is working to a clear plan and philosophy, along with Ole and his coaching staff.’ Yet the figures do not support that. Simply put, Woodward has spent unwisely.

The Essex-born physicist started his career at Old Trafford paying £27.5 million for Marouane Fellaini just days after the player’s £23.5 million buyout clause had expired. That could have been put down to a beginner’s error, but Woodward does not seem to have improved with time.

In the summer of 2018, he refused to meet Leicester City’s reported £60 million asking price for Harry Maguire but ended up buying him a year later for £80 million.

More recently, Woodward pulled out of the race to sign Borussia Dortmund’s Takumi Minamino because he deemed the player too expensive, not having realised that the playmaker had a buyout clause of just £7.5 million.

The director’s latest fiasco – thrashing around on transfer deadline day attempting to sign ten different players before finally bagging an expensive loan deal for Odion Ighalo – is one of the best examples yet of his incompetence.

Woodward’s refusal to appoint a director of football in the eight years of his employment at Old Trafford suggests that he is confident of his ability to run the club’s transfer business on his own. But the figures are there for all to see, and they suggest very clearly that he most certainly isn’t.