Ole Gunnar Solskjaer is expected to return to a 4-2-3-1 formation as United face Watford at Old Trafford tomorrow.

With rested Aaron Wan-Bissaka coming back in at right back, the manager will have to decide whether to stick with Victor Lindelof as Harry Maguire’s centre back partner or give another opportunity to fit-again Eric Bailly, who put in a heroic performance against Chelsea on Monday.

We believe Lindelof will get the nod as the manager is more likely to stick with the more established partnership.

A back four would also mean that a choice needs to be made between Luke Shaw and Brandon Williams at left back. Whilst the youngster has been incredible this season, he has looked jaded in recent games and so Solksjaer is more likely to retain Shaw in that position.

In the middle of the park Scott McTominay is fit enough to join the squad but we think he’ll start on the bench until he’s match fit. Nemanja Matic, Fred and Bruno Fernandes are almost certain to be in the starting XI.

With Mason Greenwood recovering from illness and Odion Ighalo knocking on the door for his first start, the manager at last has more options up front. Dan James was rested against Club Brugge so we expect him to be in the starting line-up. If Ighalo was also to start, Martial would play left wing and James right. However, with the Frenchman having scored two in two it would be wise to keep him up front, so expect to see Mason Greenwood brought back in on the right wing, with James on the left and Ighalo on the bench. 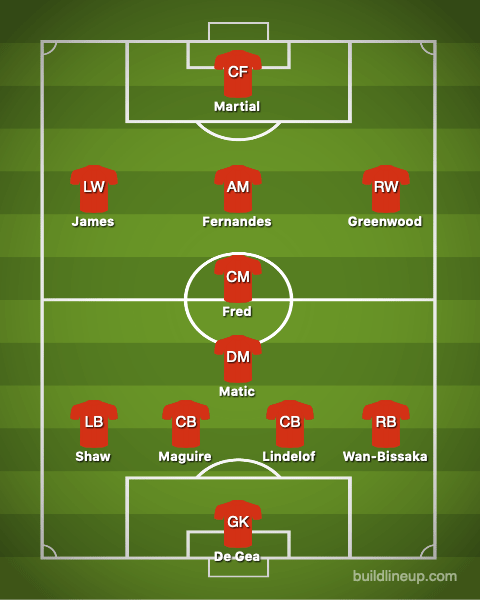