Everton vs Man United: Predicted XI with Ighalo to start

For once, Ole Gunnar Solskjaer has a lot of options as he chooses from a near fully fit squad for Manchester United’s trip to Everton tomorrow.

Other than long-term absentees Paul Pogba and Marcus Rashford, the only doubt for the game is forward Anthony Martial, who picked up a knee injury in training that kept him out of the Europa League clash with Club Brugge on Thursday.

The big question is what formation the manager will play. He has been using three at the back lately but with an extra midfielder in Scott McTominay back fit, he could stick with a back four.

Goodison is always a difficult place to visit and having lost 4-0 there last season, we think the manager will prefer to play safe with three centre backs – Lindelof, Maguire and Bailly.

Aaron Wan-Bissaka is the natural choice for right wing back and Luke Shaw is expected to play at left wing back, although Brandon Williams could be brought back in after having been rested.

Another difficult decision for Solskjaer is who to play in central midfield. Nemanja Matic has been playing well as the holding midfielder lately but Scott McTominay’s energy and passion and Fred’s box-to-box energy are both important to the side. Matic will likely give way.

Bruno Fernandes is almost certain to start in his favoured position between number eight and number 10.

This leaves two forward berths, one which will surely go to Anthony Martial if fit. Odion Ighalo, Mason Greenwood and Dan James will fight it out for the other, with Ighalo most likely to get the nod. If Martial doesn’t make it, Ighalo and Greenwood is the most probable combination.

Here then is our predicted line-up: 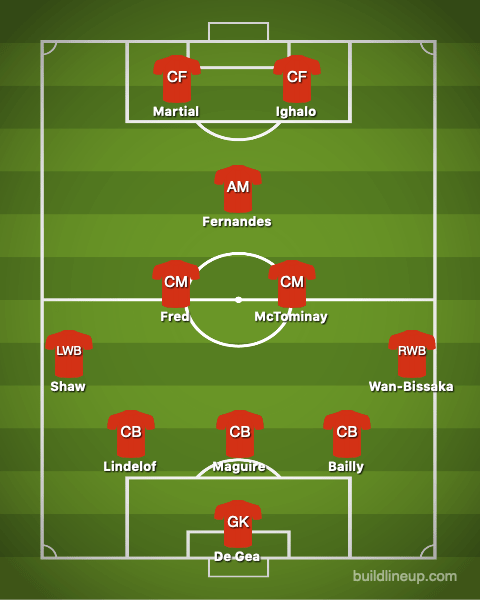