With a crucial Manchester derby awaiting United at Old Trafford in just three days’ time, Ole Gunnar Solskjaer is expected to rest a number of players for tonight’s FA Cup 5th round tie against Derby County.

Whilst the boss will see the Cup as perhaps the Reds’ best chance of silverware this year, qualification for Champions League football has to take priority.

With that in mind, Solskjaer is unlikely to risk the exceptional Bruno Fernandes or main striker Anthony Martial against Wayne Rooney’s side. We therefore expect Odion Ighalo to play up front and Jesse Lingard to play in the number 10 role behind him.

Aaron Wan-Bissaka and Dan James are both carrying knocks so they too are likely to be rested even if they pass late fitness tests. Diogo Dalot and Tahith Chong could come in at right back and left wing, respectively, to cover.

Brandon Williams will be given another chance at left back so that Luke Shaw can also prepare for the City game.

Eric Bailly is likely to be given another start as he continues his comeback after a long layoff, with Victor Lindelof rested.

In midfield, Fred, who has become essential to the side in recent weeks, will be given a well-earned break. Nemanja Matic will hold the fort and Scott McTominay should also play as he builds up fitness after a long layoff.

Mason Greenwood may also be allowed to freshen up with Juan Mata and Andreas Pereira options for the right wing. On recent form, Mata is likely to get the nod over Pereira.

With all that in mind, here is our predicted starting XI that includes eight changes from the 1-1 draw against Everton on Sunday: 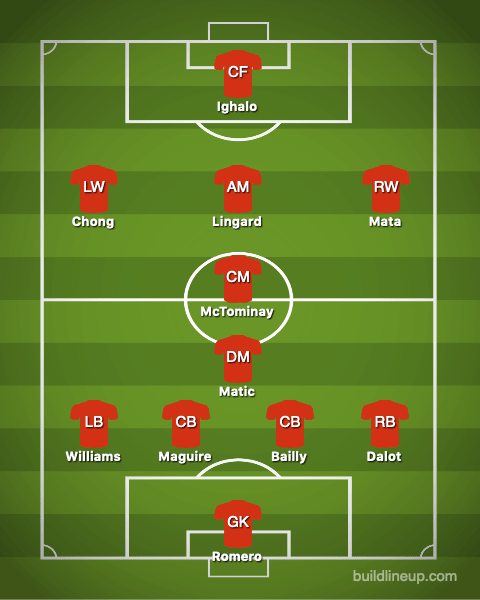 United play Derby County in the 5th round of the FA Cup tonight. But how much do you know about the Red Devils’ history in the FA Cup? Take our quiz below to find out!