Home » Could a Manchester United-based England side win Euro 2021?

Could a Manchester United-based England side win Euro 2021?

Today’s announcement from UEFA to postpone Euro 2020 for a year could mean that we see a lot more Manchester United stars lining up for England when it takes place in 2021.

If the tournament had been played this summer, the only Red Devil who would have been almost guaranteed to represent the Three Lions would have been Harry Maguire. Marcus Rashford might have made it in time following his injury, but that was far from certain.

With an extra year to impress, there are many United stars who will fancy their chances of forcing their way into Gareth Southgate’s squad.

First up is Dean Henderson, who was widely expected to be called up for the now-postponed friendly internationals this month, but who would have been unlikely to leap ahead of both Jordan Pickford and Nick Pope in the pecking order. Given another twelve months, if the 22-year-old continues to perform the way he has done for Sheffield United this season, then he would have an excellent chance of having become England’s number one by June 2021.

Aaron Wan-Bissaka, Luke Shaw and Brandon Williams could all use the extra year to establish themselves in the England squad. While Southgate has an embarrassment of riches at right back, with Liverpool’s Trent Alexander-Arnold and Atletico Madrid’s Kieran Trippier currently in the squad, Wan-Bissaka’s first season at Old Trafford has been sensational and many would argue that he is becoming as good, if not better, than the other two.

Shaw lost his position in the squad due to injuries and having now had a good run back in the United side, he should be knocking on the door once again and could have cemented his place at left back within twelve months.

Williams is a challenger to both of those players and has been a revelation this season. With twelve more months behind him, who knows how far the 19-year-old can go?

Mason Greenwood is in a similar position. He is yet to establish himself as a first team starter for United but has had a fantastic season, scoring 14 goals already. With another year’s experience under his belt and assuming his physical and playing development continue on track, Greenwood could be up there with the likes of Rashford and Kane as one of the first names on the teamsheet.

We can even imagine that should United land their most talked about summer transfer targets – Jadon Sancho and Jack Grealish, along with Birmingham City’s wonderkid Jude Bellingham, the Red Devils could almost be able to provide a full England starting XI.

Throw Axel Tuanzebe or even the rejuvenated Chris Smalling into the mix just for fun and here is your Euro 2021 England side, made up entirely of Man United players: 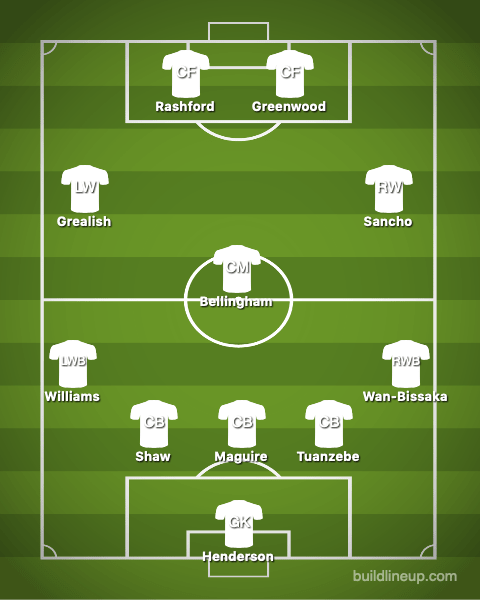