Manchester United’s Aaron Wan-Bissaka is better than Liverpool’s Trent Alexander-Arnold in all but one defensive area, statistics show.

The Liverpool star was recently ranked the world’s best full back by 90min.com, with Wan-Bissaka ranked 20th. However, the former Crystal Palace man’s figures in his first season at Manchester United suggest that defensively, he is by far the better player.

Wan-Bissaka manages more than double the number of tackles per game, at 3.8 vs. 1.6, and makes an average of two interceptions as opposed to Alexander-Arnold’s 1.2.

He also outperforms the 21-year-old in blocks, averaging 0.5 per game as opposed to 0.3.

Whilst the above figures may simply reflect the fact that the United star has more defending to do than his Liverpool counterpart, the following do not.

Alexander-Arnold commits an average of 0.7 fouls per game, whereas Wan-Bissaka’s average is just 0.5 per game.

Opposition players dribble past the Liverpool star twice as often than they do past ‘the Spider’ Wan-Bissaka, with averages of 1.4 vs. 0.7 times per game, respectively. 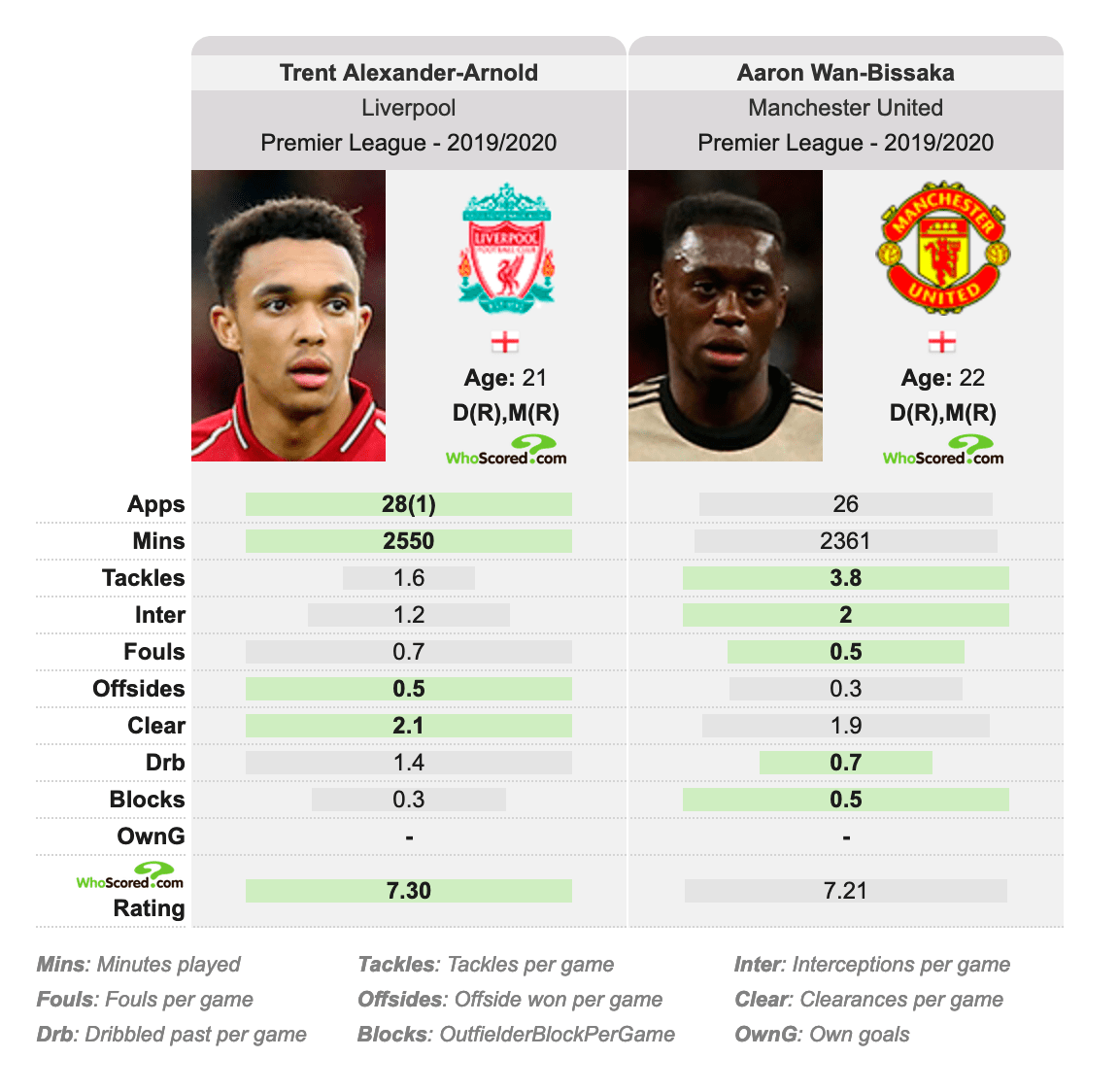 The only defensive figures in which the Liverpool man beats the United star are for offsides won (0.5 vs 0.3) and clearances (a marginally better 2.1 vs. 1.9). ‘Offsides won’ is a figure that relates to the defence as a unit, so it could be argued that this should be discounted when comparing individual players.

But it is not just defensive stats where the 22-year-old is better. Wan-Bissaka’s pass success percentage of 79.9% is superior to that of Alexander-Arnold’s 75.8%, he draws foul twice as often as the Liverpool player (0.6 vs. 0.3 times per game) and has better ball control (0.9 examples of bad control per game vs. 1.1). 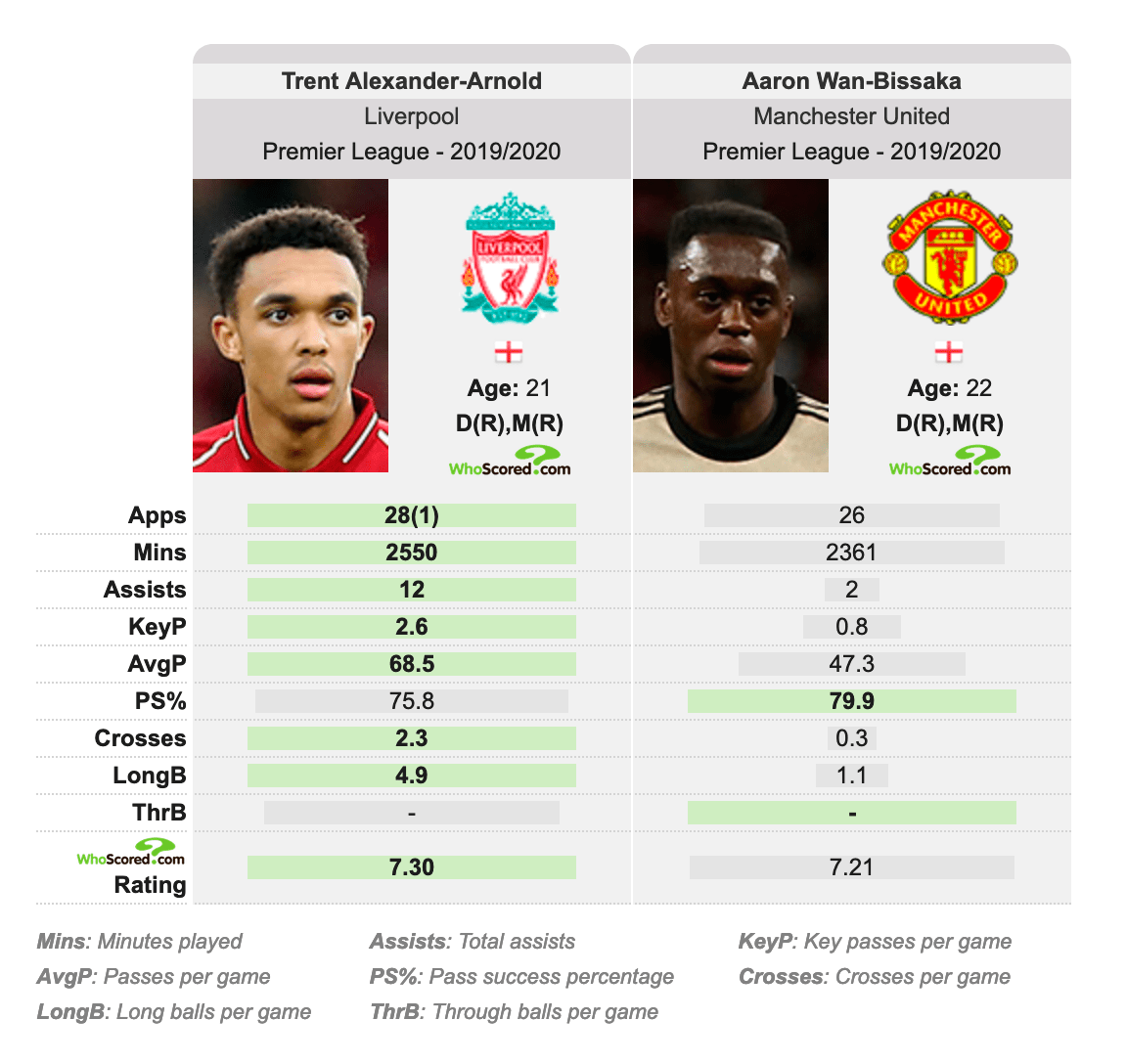 Of course, it is the Liverpool star’s goal contributions that recently earned him the accolade of the world’s best full-back. Two goals vs. Wan-Bissaka’s nil and 12 assists vs. 2 are backed up by his 2.6 vs. 0.8 key passes per game, 2.3 vs. 0.3 crosses per game and 4.9 vs. 1.1 long balls per game. But these figures must be put into perspective in a season in which Liverpool have won 93% of their games and the Red Devils have only won 41% of theirs. 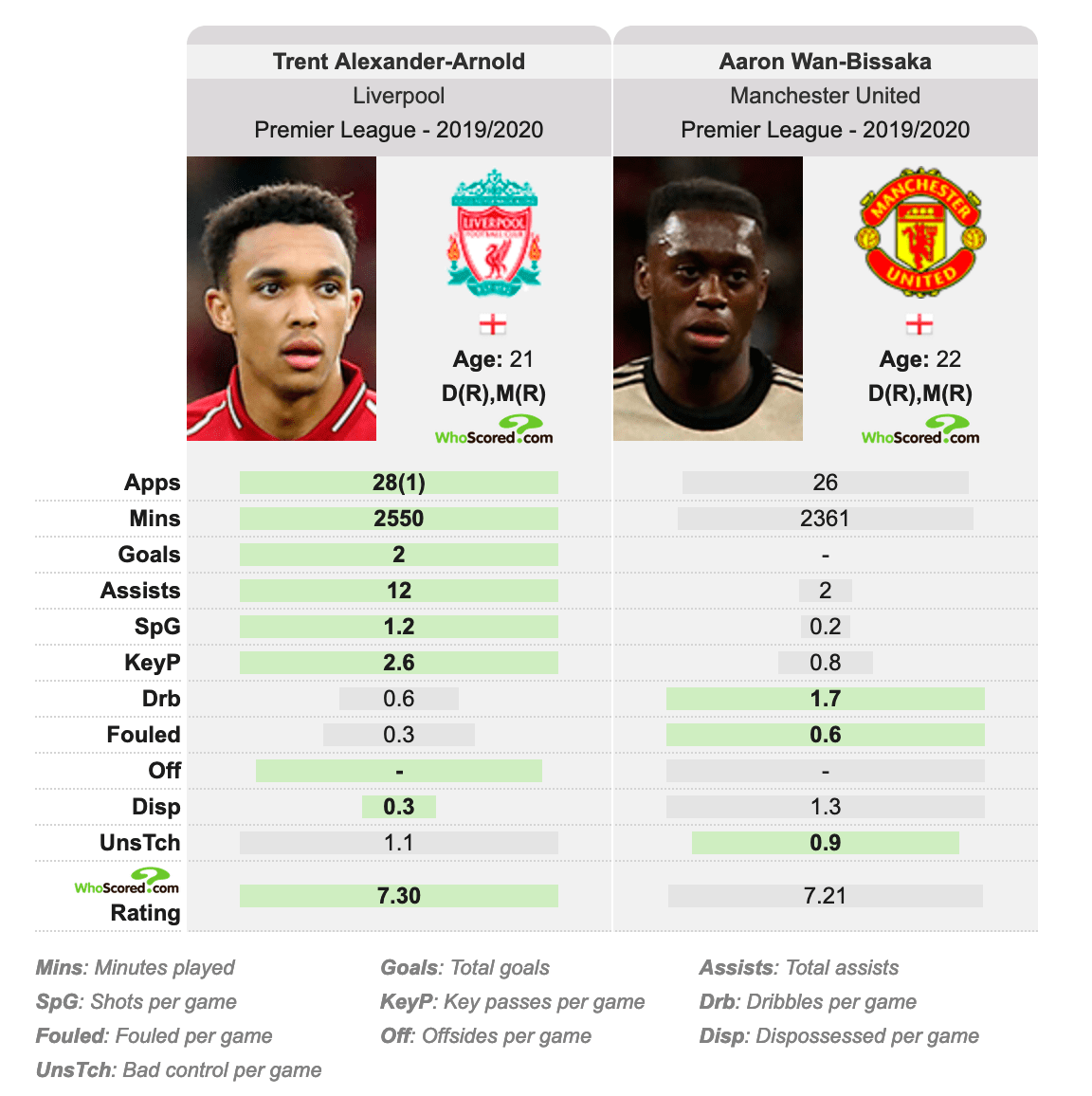 There is no doubt that Wan-Bissaka’s attacking game can be developed further and that he is not yet as effective as his Anfield counterpart going forward. But these statistics demonstrate that the reverse can be said about defensive capabilities, with Alexander-Arnold showing he has a long way to go to reach the level set by Wan-Bissaka.

Juan Mata wants to stay in Europe after...