Manchester United could be back at Old Trafford around June 16th

Manchester United look like they will complete the season at Old Trafford after all as Premier League clubs have united to oppose the neutral venue scheme proposed by the authorities.

In a four-hour video call yesterday, bosses agreed to challenge the decision, made by the Premier League itself in consultation with the government, the police and the Sports Grounds Safety Authority.

The decision was made because of fears that fans would gather outside stadiums during matches, but a number of clubs opposed the idea, arguing that home field advantage remained crucial for the remainder of the season.

The clubs argued that their good working relationship with local police forces and communications with their own fans would allow them to better control the situation from their own grounds.

It was understood, however, that if the government does not agree to the proposal then the clubs will still reluctantly accept the neutral venue plan.

Richard Masters, the Premier League chief executive, confirmed that clubs also discussed for the first time the possibility of reducing the number of remaining games or ending the season without playing again, but stressed that the focus was on completing the season fully.

‘The discussions about curtailment are contingency planning. All the discussions were about concluding the season but it is prudent to have a look at what might happen in alternative scenarios’ he said (source: The Mirror).

If the season was not completed and a points-per-game basis was used to decide the outcome, United would finish in fifth place (with 1.55 points per game), ahead of Sheffield United on 1.53 in sixth.

This would be sufficient to qualify for next seasons’ Champions League if Man City’s UEFA ban is upheld on appeal.

However, with the government yesterday giving the Premier League the green light to resume football from June 1st, the most likely scenario is that the season will be completed with a timetable similar to the one . predicted here a month ago.

This would see United back in action on or around June 14th with an away (or neutral venue) fixture against Spurs. 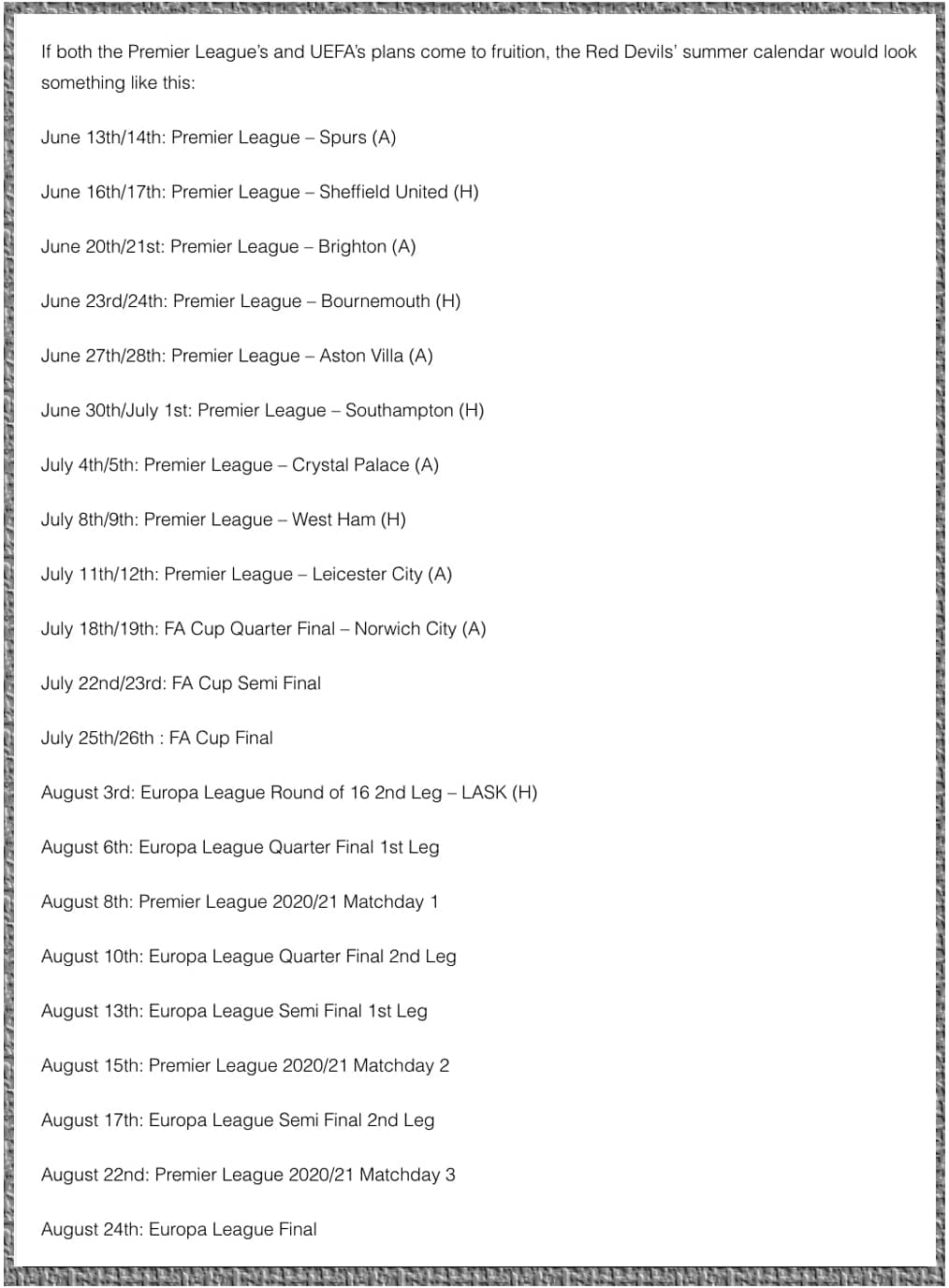 Spain’s La Liga and Italy’s Serie A may also resume on or around the same date, with the German Bundesliga scheduled to restart this Saturday.

The Red Devils are scheduled to resume training at Carrington on Monday.