All eyes are on the German Bundesliga this weekend as the long-awaited return to football action starts.

This gives football-starved Manchester United fans a good opportunity to watch a number of stars who are linked with a move to Old Trafford this summer, and these eight are strong contenders as Ole Gunnar Solskjaer looks to strengthen his squad.

1. Jadon Sancho (Borussia Dortmund): United’s pursuit of the 20-year-old is one of the hottest transfer stories in the world and the Red Devils look to have beaten off practically all the competition to sign him. The question is whether a fee can be agreed with Dortmund.

The fact is that he is Ole Gunnar Solskjaer’s top priority this summer, particularly as he plays in a position which the Red Devils have struggled to fill since the days of Cristiano Ronaldo and David Beckham.

2. Timo Werner (Red Bull Leipzig): Whilst most of the newspaper attention is on Werner’s potential move to Liverpool, United are and always have been in the hunt and the player himself has indicated that he is considering a move to Old Trafford. Liverpool have reportedly put all transfer business on hold and with a £52 million release clause that ends in June, Ed Woodward could pull off a masterstroke in the coming weeks and land one of the world’s most coveted strikers.

3. Denis Zakaria (Borussia Moenchengladbach): The Athletic recently reported that the Red Devils are prioritising a holding midfield player this summer and Zakaria’s name has been strongly linked with a move to Old Trafford. The Swiss international is valued at around £40 million, which would prove a lot more cost-effective than alternatives such as Declan Rice, Wilfred Ndidi and Thomas Partey.

4. Corentin Tolisso (Bayern Munich): Another midfielder reportedly on United’s radar is Bayern’s 25-year-old Tolisso, who has struggled to nail down his place in the Bavarian side since returning from a knee injury. Reports are that he will be sold in the summer and as a versatile player who can play any central midfield role, the Frenchman could be a very shrewd investment for the Reds.

5. Kai Havertz (Bayer Leverkusen): One reason that Bayern might sell Tolisso is to make way for Havertz, who is hot property right now in Germany. And whilst the Bavarians are in pole position, the incredibly talented 20-year-old remains on United’s shortlist and could be the perfect replacement for Paul Pogba should he move in the summer. 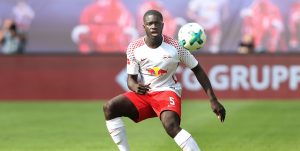 6. Dayot Upamecano (Red Bull Leipzig): The Frenchman has attracted huge interest for his classy performances at centre back for Red Bull this season and United have been reported to be one of the clubs chasing his signature. With the likes of Chris Smalling, Phil Jones and Marcos Rojo all potentially moving on this summer, there is a real feeling that the Red Devils will make a strong move for Upamecano.

7. Rabbi Matondo (Schalke 04): Reports emerged this week that the Red Devils have lined up the Welshman as a backup plan should they not land Sancho’s signature this summer. The 19-year-old has all the hallmarks of a Solskjaer-profile player and he is a tremendous prospect for the future.

8. Erling Haaland (Borussia Dortmund): United’s interest in Haaland did not end when they lost out to Dortmund in the race to sign the prolific Norwegian in January. Whilst his eminently affordable £65 million release clause reportedly doesn’t kick in until summer 2021, rumours will not die down that Real Madrid are targeting the 20-year-old for a summer transfer and United are said to be willing to match any offer that the Spanish giants make.