Home » How Manchester United could line up next season

How Manchester United could line up next season

Manchester United will be able to field two top players in every position if they sign their four top transfer targets this summer.

Reports suggest that the Red Devils are actively trying to sign Borussia Dortmund’s Jadon Sancho, Birmingham City’s Jude Bellingham plus a striker and a holding midfielder in the next transfer window.

With the likes of Lautaro Martinez, Timo Werner and Erling Haaland seemingly out of reach, the striker linked with a move to Old Trafford who would seem most likely to join would be either Lyon’s Moussa Dembele or Wolves’ Raul Jimenez.

For the defensive midfield role, Atletico Madrid’s Thomas Partey, Borussia Moenchengladbach’s Denis Zakaria and West Ham’s Declan Rice are among the players about whom United have reportedly made enquiries.

So if United are successful in signing a player in each of those four positions, how might they line up next season? The fact is that there will be competition for every position. If we assume that Jimenez and Partey join along with Sancho and Bellingham, here’s how a 22-man United squad could look next season: 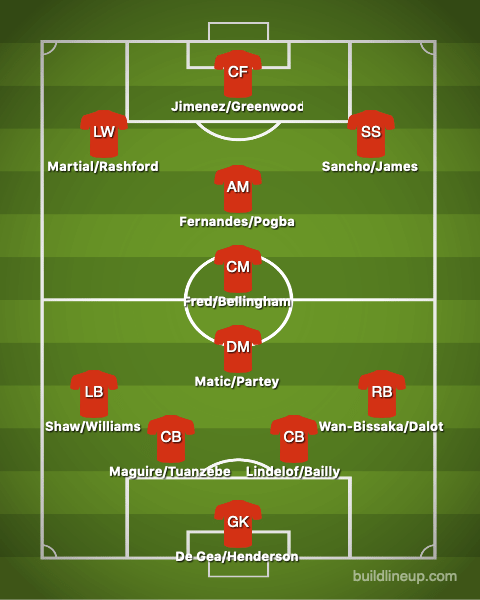 It is certainly a mouthwatering prospect. In goal, Dean Henderson, who has had an incredible season at Sheffield United, would provide competition for David de Gea. Aaron Wan-Bissaka will have Diogo Dalot pushing for a place, with Brandon Williams also challenging for both full back positions as well.

A fit Axel Tuanzebe and Eric Bailly will put pressure on Harry Maguire and Victor Lindelof at centre back, Partey and Matic could share holding midfield duties and Fred, Bellingham and Scott McTominay could all challenge for places alongside Bruno Fernandes and Paul Pogba in the more attacking role.

In attack, Sancho would have Dan James as backup, Jimenez could share the striker role with Mason Greenwood, with Anthony Martial and Marcus Rashford also capable of playing up front as well as on the left wing.

On paper at least, this would be the strongest Manchester United squad for many years and one capable of challenging again for the Premier League title.