Paul Pogba and Bruno Fernandes trained together today as the Manchester United squad prepares for the resumption of the Premier League season.

The midfielders were photographed by The MEN arriving at the Carrington Training Complex in consecutive time slots, with Pogba in his yellow Ferrari and Bruno in a Mini.

The Frenchman has not played for the Reds since Boxing Day and has been recovering from ankle surgery. Fernandes joined the club at the end of January and was an instant hit at Old Trafford before football was put on hold due to the coronavirus outbreak. 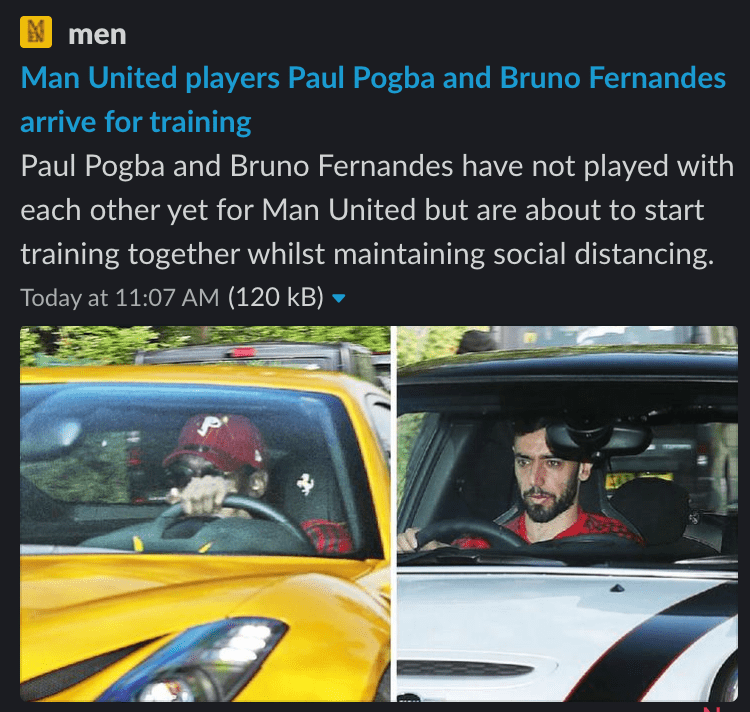 Whether or not Pogba moves on at the end of the season, the prospect of seeing the two world class midfielders line up alongside each other is a mouthwatering one.

Gary Neville recently expressed his excitement at seeing the duo play together, saying ‘they could be amazing together if they compromise and work to help each other’.

‘So definitely, it’s a big yes [that Pogba and Fernandes can play together].’

‘But I’ve also got Scott [McTominay], Fred, Nemanja [Matic]. You’ve got three players there as well, and you can’t just play with midfielders either.’

‘But there are many games coming up and I’m sure we can find a good connection between them, and we’ve been discussing that as a coaching team and are looking forward to it.’

If all goes to plan and Premier League matches are played in the order they were originally scheduled, Pogba and Fernandes’ first outing together could be a difficult away fixture at Tottenham.

That could be as soon as June 12th, just over three weeks away.