Manager Ole Gunnar Solskjaer expects to have a fully fit squad to choose from as he takes his team to London to face Tottenham Hotspur in a crucial tie in the Red Devils’ bid for a top four finish.

But what side will the boss field on June 19th, with the likes of Marcus Rashford and Paul Pogba fit to join the players that had gone 11 games unbeaten before the coronavirus crisis brought football to a halt?

The issue comes in terms of formation. Solskjaer will surely want Rashford, Pogba, Bruno Fernandes and Anthony Martial in his starting line up. But if Martial is to be centre forward and Rashford is to occupy the left wing, who plays on the right wing?

If Solskjaer continues with either Dan James or Mason Greenwood on the right flank, the team will look something like this: 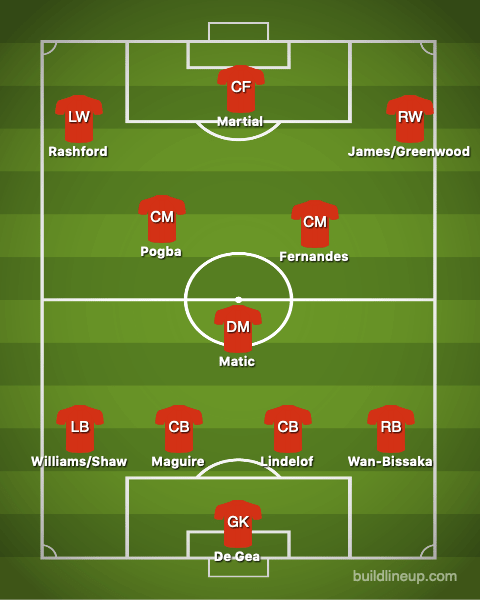 However, is that United’s strongest 11? Is James more valuable to the side than Fred, who has arguably been player of the season so far? And does this formation, with two very attack minded CM’s in Pogba and Fernandes, provide enough box-to-box grit and mobility in midfield?

Solskjaer may therefore look to change the formation to accommodate an extra midfielder. This would see Rashford and Martial operating as twin strikers, with Pogba and Fernandes behind them, Matic in front of the defence and Fred providing the link between defence and attack.

The question here is where will the width come from? Martial and Rashford can push out wide to allow Fernandes and Pogba to make forward runs – a role Fernandes in particular thrives on. But without traditional wingers, there will be a huge onus on the two full backs to push forward to stretch the opponents’ defence.

This runs the risk of leaving the Red Devils exposed to counter-attacks when the full backs are stranded upfield: 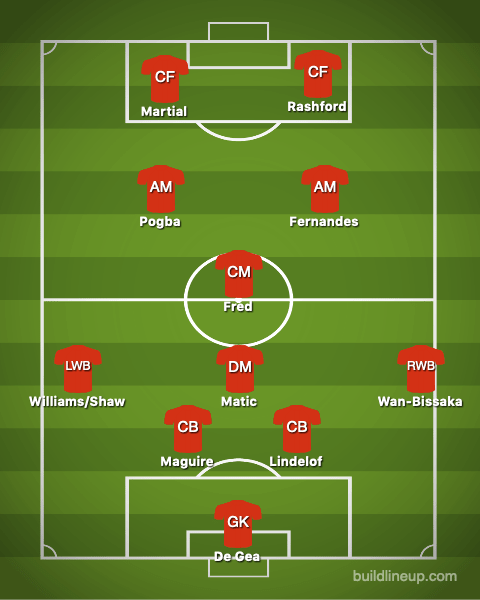 This can either be solved by Matic playing even deeper than normal, being ready to drop back into the defensive line at any time, or by sacrificing the Serbian from the line up and reverting to a back three of Maguire, Lindelof and either Eric Bailly or Luke Shaw: 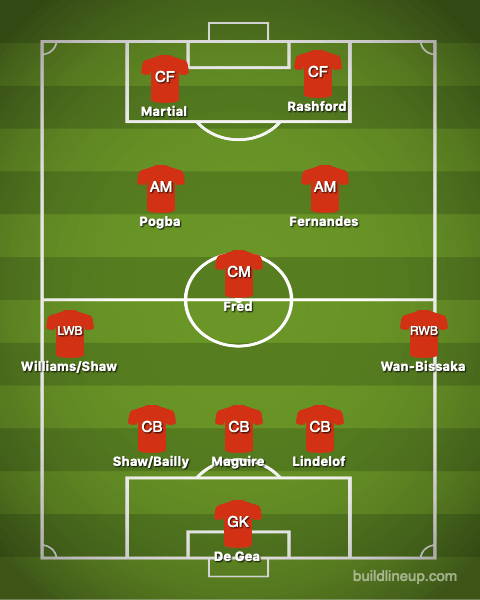 The Premier League’s ruling yesterday to allow nine players on the subs bench and five substitutions during the game will allow the manager to chop and change the formation according to the state of the game, which will offer United a huge advantage in terms of solving this dilemma.
A bench of Romero, Bailly/Williams/Shaw, Tuanzebe, Matic, McTominay, Mata, James, Greenwood and Ighalo, for example, provides a wealth of options.