Football is finally back and Ole Gunnar Solskjaer has an almost fully fit squad to choose from ahead of tomorrow’s game against Spurs at the Tottenham Hotspur Stadium.

At today’s press conference, Solskjaer confirmed ‘we have two players probably, Phil Jones and Axel Tuanzebe, who will miss this game and the start.

‘Let’s see how bad they are, but apart from that rest of the squad is fit and available.’

There have been some suggestions that the boss will not risk Paul Pogba from the start so we might have to wait until the hour mark to finally see the enigmatic Frenchman play alongside Bruno Fernandes.

If that is the case, given that this is an away fixture against a tough opponent after a long absence, Solskjaer may opt to play a more cautious formation. He deployed three at the back to good effect in the unbeaten streak before lockdown so it is expected he might do that again.

With Harry Maguire certain to be at the heart of the defence, Aaron Wan-Bissaka at right wing back and Solskjaer likely to keep faith with Victor Lindelof, he could either play Luke Shaw as the third centre back with Brandon Williams at left wing back, or play Eric Bailly at centre back with Shaw at wing back.

The manager could also play both Fred and Nemanja Matic behind Bruno Fernandes in midfield, with Marcus Rashford and Anthony Martial playing as a fluid front pair.

Pogba and the likes of Dan James and Mason Greenwood could then be brought on against tired legs in the second half, with a maximum of five subs now allowed.

With all that in mind, here is our predicted line-up: 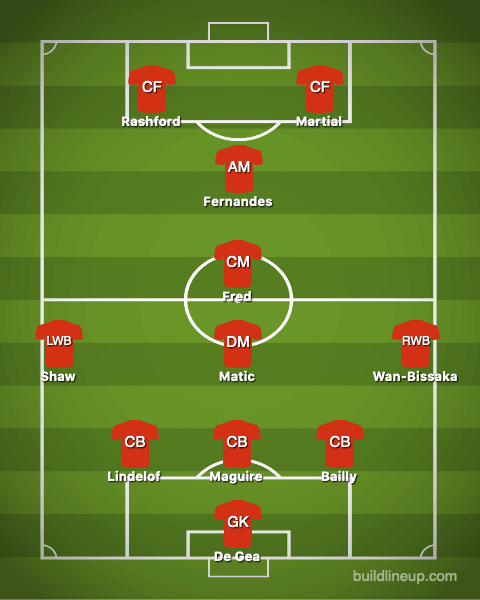