Ole Gunnar Solskjaer has confirmed his Manchester United squad came away unscathed from the clash vs Tottenham Hotspur, meaning they’re a near-fit team for the match vs Sheffield United.

In a must-win game, the legendary Norwegian will only be without Phil Jones and Axel Tuanzebe, in comparison to his opposite number who is facing an injury crisis, particularly in defence.

United’s draw with Tottenham was seen as a decent result but in truth, given how Chelsea won their match, it means it was a blow to their top-four chances.

Solskjaer now needs his men to win every remaining fixture in what is a relatively easy run-in on paper and hope those above them drop points.

Restoring Champions League football to Old Trafford next season is seen as crucial and evidence that the former Molde man is the manager to lead the Red Devils to success. 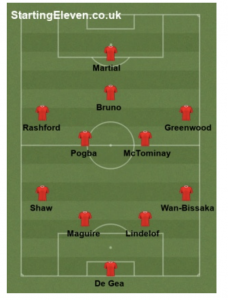 It’s impossible for Solskjaer to not have noticed how Paul Pogba and Mason Greenwood immediately improved the team when they came on vs Tottenham and so they must start this fixture.

They would’ve gotten minutes under their belts and featured in more training sessions so they should be ready to go.

Scott McTominay only just extended his stay at Old Trafford to 2025 and it’s likely Solskjaer will continue with his faith in him.